Gorgonops (from Greek Γοργών 'Gorgon' and ὤψ 'eye, face', literally "Gorgon eye" or "Gorgon face") is an extinct genus of therapsid which lived about 260-254 million years ago, during the Late Permian. It was a typical representative of the suborder Gorgonopsia, the dominant predators of their day, which in the largest forms grew to over three metres long.

Gorgonops is featured in the game as a rare creature 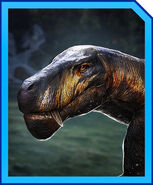