Gorgosaurus (meaning "fierce lizard") is a genus of tyrannosaurid theropod dinosaur that lived in western North America during the Late Cretaceous Period, between about 76.6 and 75.1 million years ago. Fossil remains have been found in the Canadian province of Alberta and possibly the U.S. state of Montana. Paleontologists recognize only the type species, G. libratus, although other species have been erroneously referred to the genus.

Like most known tyrannosaurids, Gorgosaurus was a bipedal predator weighing more than two metric tons as an adult; dozens of large, sharp teeth lined its jaws, while its two-fingered forelimbs were comparatively small. Gorgosaurus was most closely related to Albertosaurus, and more distantly related to the larger Tyrannosaurus and Tarbosaurus. Gorgosaurus and Albertosaurus are extremely similar, distinguished mainly by subtle differences in the teeth and skull bones. Some experts consider G. libratus to be a species of Albertosaurus; this would make Gorgosaurus a junior synonym of that genus.

Gorgosaurus lived in a lush floodplain environment along the edge of an inland sea which would later rise up to form North America. It was an apex predator, preying upon abundant ceratopsids and hadrosaurs. In some areas, Gorgosaurus coexisted with another tyrannosaurid, Daspletosaurus. Although these animals were roughly the same size, there is some evidence of niche differentiation between the two. Gorgosaurus is the best-represented tyrannosaurid in the fossil record, known from dozens of specimens. These plentiful remains have allowed scientists to investigate its ontogeny, life history and other aspects of its biology. Gorgosaurus was between a key evolutionary step in the tyrannosauridae, growing larger, a more powerful bite, and smaller arms. Gorgosaurus also was slower than Albertosaurus but had a stronger bite up to 3 tons of force.

Gorgosaurus is a legendary tournament carnivore in Jurassic World: The Game. It sports a prominent crest on its snout, and seems to be covered in crocodilian armor on its back, both of which are inaccurate. 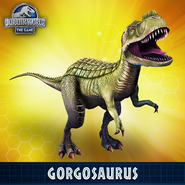 Gorgosaurus appears in Jurassic World: Alive. The coloration is a light blue with some shades of purple on its snout and other parts of its body with a pale grey and dim yellow blending on the underbelly. It has two prominent golden crests above its eyes, like the real animal, and a light blue streak with blackish dark blue in the middle from its head to the tail. 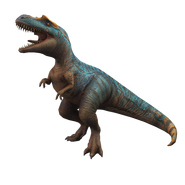