Gorgosuchus is a genetically modified hybrid of Gorgosaurus and Kaprosuchus.

Gorgosuchus is of the hybrids that can be created in the game. It became creatable for the player's park on December 7th, 2016.

Gorgosuchus is one of the hybrids that can be created for the game. 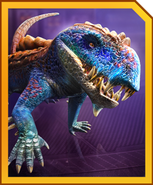 Retrieved from "https://jurassicpark.fandom.com/wiki/Gorgosuchus?oldid=221179"
Community content is available under CC-BY-SA unless otherwise noted.