Gracilisuchus is an extinct genus of pseudosuchian (a group which includes the ancestors of crocodilians) from the Middle Triassic. Gracilisuchus was tiny, only 30 cm long.

Gracilisuchus is one of the creatures that Henry Wu recreated for Tim Murphy's new Jurassic Park. A pack of them killed Wu when Lewis Dodgson opened their cage. They were later herded back into their pen by Dodgson. Later on, the pack was freed by Dr. Backer in an attempt to kill Peter Ludlow and his bodyguard. Once freed they broke into his locked office and instantly began to kill and eat the villainous businessman and his aide. 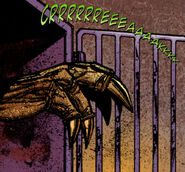 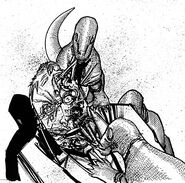 Gracilisuchus eating Peter Ludlow
Add a photo to this gallery

Retrieved from "https://jurassicpark.fandom.com/wiki/Gracilisuchus?oldid=238251"
Community content is available under CC-BY-SA unless otherwise noted.