Gray Mitchell is the younger brother of Zach, as well as the son of Karen and Scott and the younger nephew of Claire Dearing[2]. He is a precocious young boy who has a great interest in dinosaurs. In 2015 he and his elder brother visited Jurassic World and was involved in much of the events of the incident. Gray is portrayed by American actor Ty Simpkins in Jurassic World.

After boarding an airplane, Gray and Zach boarded a ferry boat to Masrani Global Corporation's famous dinosaur theme park Jurassic World[3], whose aunt, Claire Dearing, was Senior Assets Manager for.[4] They were supervised by Claire's personal assistant Zara, as Claire was too busy to spend time with her nephews. While there, they got to see many of Jurassic World's attractions, including the Mosasaurus Feeding Show, Underwater Observatory, and the T. rex Kingdom. On the way, in the Monorail, Gray broke down in tears at his parents' impending divorce but was told to grow up by an annoyed and unsympathetic Zach. As he looked out the window, he saw two Asset Containment Unit vehicles driving in the valley below, but was unaware of their true purpose.

Gray and Zach ignored an order for the ride to return and ventured into the Restricted Area, though Gray was reluctant. As they viewed a herd of four Ankylosaurus, Gray suddenly saw a fifth dinosaur reflected in the glass, one with white scales, spikes, razor sharp teeth, and bloody red eyes. This was the Indominus rex, the park's first genetically-modified hybrid which had escaped her paddock. The two nervously looked behind them and saw the creature, which let out a blood-curdling roar and kicked Gray and his brother's vehicle as if it was a soccer ball between two Ankylosaurus who were also fleeing from the hybrid. Because they got too close to the Ankylosaurus, one of the Ankylosaurus swung its clubbed tail at the spherical vehicle, leaving it crippled. Upside down, Gray watched in horror as the Ankylosaurus fought the hybrid before it was flipped over. Gray looked away in disgust as the hybrid grabbed and twisted the Ankylosaurus's neck and devoured it.

After killing the Ankylosaurus, the Indominus turned its attention to the Gyrosphere and attempted to break it open by stabbing her claw into the glass. Then the Indominus grabbed the Gyrosphere with her mouth and started slamming it repeatedly into the ground. Thinking quickly, Zach releases the seatbelts and the boys fall out.

Pursued by the hybrid, they only narrowly escape by jumping off a cliff into a pond. Gray and his brother travel into the dense wilderness of Isla Nublar, Where they eventually discover the remains of the Jurassic Park Visitor Center.

The two brothers enter the Visitor Center's Garage where they manage to get Jeep 29, one the Jeep Wrangler Staff Vehicles parked inside the garage, to work again, which they used to drive back to Jurassic World.

Eventually, he and his brother made it back to Jurassic World and were among the many civilians in Main Street when the inhabitants of the Jurassic World Aviary went through the street attacking many of the people there. They witnessed one Pteranodon grab Zara and fly off with her, which resulted in Zara falling into the Mosasaurus containment tank and both her and the Pteranodon being consumed by the aforementioned reptile. The two were nearly crashed into by a falling Pteranodon, but it slid to a halt inches from them. After hearing their aunt calling for them, they found her just in time to witness her shooting a Dimorphodon that was attacking Owen Grady, which surprised them, but not as much as when Owen kissed her.

As they were fleeing the chaos, Owen and Claire heard from Lowery that Vic Hoskins was intending to use Owen's trained Velociraptors to hunt the Indominus, much to Owen's fury. Gray watched as Owen slugged Hoskins in the face and curiously asked him questions about the raptors. When Owen stated that he was the alpha of the pack, Gray smiled in amusement. The two took refuge in an MVU, where they shared a brotherly moment when Zach vowed to be a better brother to Gray. The two watched as the raptors pursued the hybrid, only to turn on the humans and kill most of them when it was revealed to have raptor DNA. Though scared stiff when a soldier was killed by a raptor inches away from them, Gray managed to stun another raptor with a shock prod, which he excitedly wanted to tell his mother about only for Claire to beg him not to. They reached Main Street with Owen in tow, only to find the labs in the Innovation Centre being cleared by InGen soldiers and tanks filled with more hybrids. Hoskins then appeared and revealed his intentions to use the hybrids for military purposes, but his sales pitch was interrupted by the raptor Delta, who ignored his attempt to pacify her and ripped him apart.

Fleeing through the lobby, Gray triggered the Holoscape to show a Dilophosaurus, which distracted Delta for a brief time. Their escape was cut off by Blue, Echo, and the newly-arrived Delta, but Owen was able to regain his position as alpha just as the Indominus arrived. Blue refused to kill the humans and was swatted aside, resulting in Echo and Delta attacking the hybrid with Owen providing covering fire. Hiding in a gift kiosk, Gray calculated that they needed "more teeth" to defeat the hybrid, prompting Claire to head for Paddock 9 with a flare.

Owen joined them as Delta and Echo were killed by the hybrid, which proceeded to attack them and very nearly dragged Gray out to his death before Zach saved him. Just then, Claire arrived with the park's old veteran Tyrannosaurus rex, Rexy, alongside. However, the Indominus proved to be too difficult for even Rexy to defeat and the Tyrannosaurus was smashed about into the kiosk, nearly killing Gray and the others, before being thrown to the ground. Gray watched as Blue came out of nowhere and attacked the hybrid, saving Rexy, and the two carnivores used their combined strength to hurl the Indominus to the edge of the Jurassic World Lagoon, where it was dragged to its demise by the Mosasaurus. After watching Rexy and Blue bid each other farewell Gray and the others were evacuated to the mainland, where they were reunited with their parents.[3]

While Gray doesn't appear in the series; Roxie mentions Zach and Gray as potential campers over a phone call with Claire Dearing.

Gray is very intelligent and has a variety of scientific interests, especially dinosaurs. As was typical of kids his age, he was exceedingly hyper, impatient and easily excited by dinosaurs, which was a cause of annoyance for his older brother. He was also quite sensitive, as he burst into tears at the knowledge of his parents divorce and his brother's indifferent attitude. Though obviously frightened by his ordeal on the island, Gray was also quite brave as he stunned a raptor with a cattle prod with little assistance.[3]

During their trip to the park, Gray is constantly trying to talk with his brother about the dinossaurs and the island, showing that he really wants to be closer to Zach despite the latter constantly dismissing him. However, he can sometimes be a little snarky on his brother, as seen when he embarassed Zach in front of some girls by asking him what he expects to happen by just looking at them. Althought the two are always on rivalry, Gray grows closer to his brother during their ordeal at the island and seeks comfort on him, as seen when Zach promises to protect him no matter what when their inside the veterinarian truck.

Though Zara was assigned to look after Gray along with Zach, during his visit, she was unenthusiastic about the task and preferred to discuss her wedding details on her phone, which resulted in them leaving her and nearly getting killed by the Indominus rex. Despite this, Gray was horrified when Zara is devoured by the Mosasaurus.

While it was unexpected as Gray and Zach watched Owen kiss their aunt during the Pteranodon attack, they were both opted to remain with Owen through the whole ordeal on the island.

Gray was excited and hugged his aunt upon meeting up with her in the innovation center. However, since Claire was too busy to spend time with the brothers, Gray got upset. Despite not spending time with Gray and Zach in the park, Claire was very distressed when her nephews were missing through the whole park incident. However, she was happy when she reunited with them. Since then, she became protective over them and Gray slowly grew closer with her.

Gray spots the reflection of the Indominus in the Gyrosphere

About to be attacked by the I. rex

Zach and Gray being attacked by the Indominus

The Indominus attacks the Gyrosphere

The I. rex attacking them in the Gyrosphere

Zach and Gray escape the Gyrosphere attack (just!) but the I. rex is still after them

The brothers running from the I. rex which is still chasing them

The brothers have a close encounter during the Main Street attack

The brothers trying to hide from the Indominus rex

Behind the scenes photo of Ty Simpkins and Nick Robinson 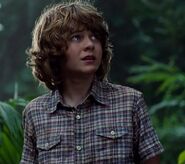 Gray shares a number of similarities to Tim Murphy in the first Jurassic Park film. The hyperactive son of divorcing parents, he is the younger of two siblings, though visibly intelligent for his age in addition to being obsessed with dinosaurs. Similar to how interacting with Tim caused Dr. Alan Grant to open up more emotionally through surviving among the dinosaurs, Gray's experiences with Zach in Jurassic World helps to strengthen the bond between the two.

Gray's name is possibly a reference to his high intelligence and enormous-retention for information, as a portion of the human brain is at times referred to as "Gray matter".