Grim was a Baryonyx, and an antagonist (alongside her siblings) in the second season of the animated series Jurassic World: Camp Cretaceous.

Grim is a Baryonyx of green complexion with red patches surrounding both eyes.

Grim was featured in the second season of Jurassic World: Camp Cretaceous, serving as a minor antagonist.

For reasons unknown, Grim was abandoned at a medical station for an unspecified number of days, alongside a number of herbivores. Until, she was located by Darius, Brooklynn and Sammy in the episode The Art of Chill. Now facing a moral dilemma, Darius and Sammy argue if they should free Grim or let her die. However, the argument is cut short with the arrival of Grim's companions Chaos and Limbo, forcing the campers to retreat. In a desperate attempt to draw the carnivores away, Sammy releases the herbivores causing a brief diversion. At the last moments Darius uses the chaos as an opportunity to safely release Grim from her enclosure, allowing the Baryonyx trio to be successfully reunited.

Despite this, the Baryonyx trio (led by Chaos) continue to pursue and track down the campers throughout the series. In The Watering Hole, Grim is outside of the Genetics Lab and about to attack Brooklyn, Sammy, and Yasmina, before being distracted by her siblings calls. In Misguided Chaos, Grim and Limbo follow the group into a storage shed, but are briefly held back by an explosion devised to disorient the trio. The campers split of and the Baryonyx's led by Chaos give chase after Brooklynn and Kenji accompanied by Hap on motorcycle. Unable to fend off the trio, Hap instructs the two to live a long life, selflessly jumping off the motorcycle to fend off the Baryonyx trio alone and is killed.

Grim crosses paths with big game hunters Mitch and Tiff in Chaos Theory and attempts to ambush them. However, Grim is quickly dispatched and killed by a single shot from Mitch's custom made rifle which is fired by Tiff, who doesn't think twice before killing the Baryonyx. Her death was later avenged by her companions Chaos and Limbo, who promptly kill and devour Tiffany. 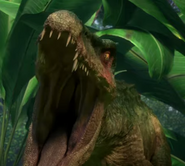 Grim hears her siblings: Chaos and Limbo inside the Genetics Lab

Grim roars at the fleeing girls: Brooklynn, Sammy and Yaz after they escaped from her later she runs off to the Genetics Lab to help her siblings 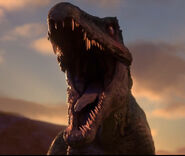 Grim before being shot by Tiffany 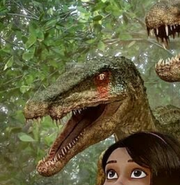 Grim and her sister, Chaos on the title screen image, Limbo replaced by a Velociraptor.

Grim in front of Hap

Chaos and Limbo together with the body of Grim.

A "Sound Strike" figure of Grim, in addition to a mini-figure, appears as part of the toy-line for Jurassic World: Camp Cretaceous. 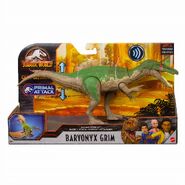 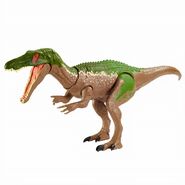