Gryposuchus is an extinct genus of gavialoid crocodilian. It is the type genus of the subfamily Gryposuchinae. Fossils have been found from Argentina, Colombia, Venezuela, Brazil, and the Peruvian Amazon. The genus existed from the Middle Miocene to Late Pleistocene. One recently described species, G. croizati, grew to an estimated length of 10 meters (33 feet). Its size rivaled other crocodillans, like Sarcosuchus, Purussaurus, Deinosuchus, and Rhamphosuchus.

Gryposuchus appears in Jurassic World: Alive as an epic creature. Though it was originally misspelled as "Gryptosuchus". However, this has since been corrected.

Gryposuchus appears in Jurassic World: The Game as a tournament creature. 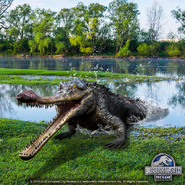