Guanlong is a genus of extinct proceratosaurid tyrannosauroid from the Late Jurassic of China. The taxon was first described in 2006 by Xu et al., who found it to represent a new taxon related to Tyrannosaurus rex. The name is derived from Chinese, translating as "crowned dragon". Two individuals are currently known, a partially complete adult and a nearly complete juvenile. These specimens come from the Oxfordian period, of the Chinese Shishugou Formation. It is often considered to be the first ever tyrannosauroid, but it is unclear at this time.

Guanlong is a carnivorous dinosaur in Jurassic World: The Game. An interesting feature to the Gunalong in the game is that it has fur-like feathers, which it had in reality. 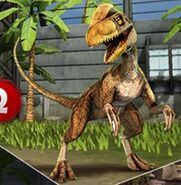 Retrieved from "https://jurassicpark.fandom.com/wiki/Guanlong?oldid=221692"
Community content is available under CC-BY-SA unless otherwise noted.