"Roll around with our dinosaurs in our glass-encased Gyrosphere. "
—Park Map(src)

The Gyrosphere is a sphere shaped ride in Jurassic World that takes tourists around an area with over 30 species, including Ankylosaurus, Apatosaurus, Brachiosaurus, Parasaurolophus, Sinoceratops, Stegosaurus and Triceratops.

The Gyrosphere reaches speeds of 5 mph and has a built-in computer monitor to identify the prehistoric wildlife that can be observed. To prevent harassing the animals, the vehicle will automatically roll backwards toward a safe distance if it is too close to an animal. Advanced invisible fence technology keeps the animals that are observed from roaming astray without the use of cages and bars that are unnecessary.[1] According to Jimmy Fallon in the Gyrosphere instruction video, the glass is able to stop a 50 caliber bullet and can protect the guest from the venomous spit of a Dilophosaurus.[2]

The Gyrosphere was developed with new technology as a way of improving on the park tour of the original park and as a way for visitors to get extremely close to the animals without any significant danger. The exhibit initially held the Ankylosaurus, Brachiosaurus, Gallimimus, Parasaurolophus, and Triceratops. An initial problem with the gyrospheres was that the dinosaurs, namely the youngest Brachiosaur Pearl, would mistake them for toys and play around with them. The interns developed a solution by painting certain gyrospheres that would be used as toys so the animals wouldn't attack the guest. [3]

The visitors to Camp Cretaceous were taken to the Gyrosphere Valley by counselors Roxie and Dave. Unlike the Gyrospheres employed by regular guests, the ones used by Camp Creteaceous attendees were not numbered. As part of their experience, they got to drive along behind the herd which was being moved by handlers to fresh grazing grounds. Dave referred to it as a "cattle drive but with dinosaurs."

Darius Bowman was excited while Ben Pincus was nervous. Kenji Kon was paired up with Ben as a passenger while Ben drove, much to Kenji's irritation. Ben wasn't the best driver. Sammy Gutierrez rode in the second Gyrosphere with Yasmina Fadoula while the latter drove. Darius wanted to drive in one by himself, but Dave insisted that he go with another camper, partnering him with Brooklynn. He drove. The counselors followed in their Mercedes-Benz G 63 AMG 6X6 while the handlers herded the dinosaurs using Kawasaki ATVs.

Ben got off to a bad start by backing his and Kenji's Gyrosphere into the counselors' Mercedes. Darius was amazed while Brooklynn kept her eyes glued to her phone, irritated with her online followers who claimed she "made Jurassic World boring." In their Gyrosphere, Sammy kept asking Yasmina annoying questions like what her favorite food and color was. Yasmina resorted to swerving the vehicle sharply in an effort to make her be quiet.

A storm which was supposed to have moved further up the coast broke, and the counselors, concerned about a stampede, cut the Gyrosphere tour short, much to the children's disappointment. Due to the radio in the Mercedes not working, Roxie and Dave drove ahead to inform the handlers, leaving the children unattended. The kids, told to stay put, immediately disobeyed and drove on ahead by themselves.

Fearful that a particularly panicky Sinoceratops would spook the herd, Darius and Brooklynn attempted to stop her, but were headbutted into the midst of the animals. They crashed into a Parasaurolophus, bounced off of it and against a Stegosaurus, who smacked another Parasaurolophus with its tail, triggering a huge stampede. In the ensuing chaos, the Camp Cretaceous Mercedes was knocked off a cliff by a Sinoceratops, narrowly missing Roxie and Dave who were standing below.

Caught up in the stampede, Darius and Brooklynn were spun around wildly. The three Gryospheres managed to outrun the stampeding herd by driving into the surrounding jungle. A falling tree that had been struck by lightning fell and blocked Sammy and Yasmina's path, causing them to crash into it, but they survived. Meanwhile, Kenji took over driving his and Ben's Gyrosphere from Ben and immediately crashed into a tree. The boys were unharmed, although they ended up upside-down where the vehicle overturned. As for Darius and Brooklynn, a Sinoceratops impaled their Gryosphere on its horn and flung it aside into a pit of quicksand.

Sammy and Yasmina in their damaged but still functioning Gyrosphere were able to find and rescue Kenji and Ben, and then found Darius and Brookylnn's vehicle sinking in the quicksand. Sammy was able to get their sinking Gyrosphere free by using a tamed Sinoceratops to tow them out.

Gyrosphere 07 was used by Zach and Gray on their visit to Jurassic World. Zack and Gray saw an opening in the perimeter fence and went in where they saw several Ankylosaurus. While in there, the park's newest attraction, Indominus rex attacked. The Ankylosaurs ran to avoid the fight, hitting the Gyrosphere on their way, but the Indominus rex was able to get one, although it put up a fight and even smacked the I. rex in the head, but the I. rex slashes its legs and flips the Ankylosaurus over and kills it. The Indominus resumed attacking the two brothers by piercing her mid talon into the glass and rotating it so the boys could see their demise. She then attempted to chomp the Gyrosphere whole but gets her mouth stuck, but attempts to smash it several times into the ground to crack it open, but the two brothers escaped by getting out of their damaged Gyrosphere and jumping off a waterfall.

Shortly afterward, the Indominus attacked a herd of Apatosaurus, killing five and fatally injuring one before moving on into the restricted area of Isla Nublar, leaving their bodies uneaten.

Owen Grady and Claire Dearing found these Apatosaurus and comforted the injured dinosaur, settling her down when she attempted to rise up, upon which she died peacefully. The death of such a harmless and docile creature caused Claire much sorrow, which was mixed with horror when they discovered the five dead ones. The discovery of these Apatosaurs made Owen realize that the Indominus was hunting for sport.[2]

When the volcano erupted three years later, Owen, Clare, and Franklin Webb, while looking for Owen's only surviving raptor, took shelter behind a weathered Gyrosphere to avoid getting trampled by a stampede consisting of Allosaurus, Ankylosaurus, Apatosaurus, Brachiosaurus, Carnotaurus, Compsognathus, Gallimimus, Pteranodon, Sinoceratops, Stegosaurus, Triceratops, and the T. rex of Isla Nublar.

Zach and Gray in Gyrosphere 07. 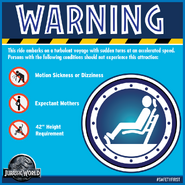 Safety warning for the Gyrosphere.

I. rex hand about to break through Gyrosphere 07's top

Gyrosphere 07 in the path of a pair of Ankylosaurus.

Injured Apatosaurus in the Gyrosphere valley

Apatosaurus eating in the Gyrosphere valley

I. rex reflection in Gyrosphere 07 interior

Indominus roaring seen outside of Gyrosphere 07

Ankylosaurus about to fight Indominus seen outside of Gyrosphere 07

I. rex chasing Gyrosphere 07 and Ankylosaurs

Zach and Gray screaming in the Gyrosphere

I. rex roaring next to the busted Gyrosphere 07

The Gyrosphere will appear in the game LEGO Dimensions. It can only be unlocked by purchasing the Jurassic World team pack and inserting the piece into the "portal" that comes with the game.

The Gyrosphere will appear in the game. Much like the Safari Adventure in Jurassic Park: Operation Genesis, a Gyro Station needs to be built on the fence so that the player can add path around the enclosure that the Gyrosphere can follow around to get a better look at the dinosaurs.

Ankylosaurus and Apatosaurus near by Gyrosphere

Gyrosphere passing a herd of Tsintaosaurus

First person view of an Allosaurus in a Gyrosphere

Gyro track being made 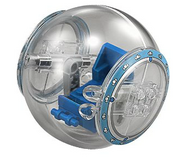 A Gyrosphere with a cannon mounted on the top of the vehicle is a part of a battle pack that includes Indominus rex.

The original storyboards and the LEGO game feature also Gallimimus on the attraction.[4]