The Haast's eagle (Hieraaetus moorei, formerly called Harpagornis moorei) is an extinct species of eagle that once lived in the South Island of New Zealand, commonly accepted to be the Pouakai of Maori legend. The species was the largest eagle known to have existed. Its massive size is explained as an evolutionary response to the size of its prey, the flightless moa, the largest of which could weigh 230 kilograms (510 lbs). Haast's eagle became extinct around 1400, after the moa were hunted to extinction by the first Māori.

The Haast's eagle does not appear physically in the game, but a statue of it can be purchased with real money as a decoration.

Haast's eagle appears as a Cenozoic creature in the game with a epic form and a rare GEN 2. 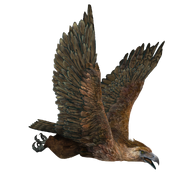 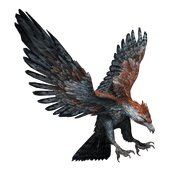