Hawkes, is a mercenary that works with Dr. Henry Wu and under Eli Mills and the secondary antagonist in the end of the third season and later in the fifth season of the Netflix TV series Jurassic World: Camp Cretaceous. He is played by Dave B. Mitchell.

Hawkes was a mercenary hired by Eli Mills to escort Dr. Henry Wu on a mission to retrieve Henry's old laptop on Isla Nublar, alongside fellow mercenaries Reed and Dawson. As they arrived on Nublar, a storm had overtaken the island, cutting off their contact with other mercenary teams on the island and forcing them to land further from their target than intended. The group trekked through the jungle and find the lab holding the laptop being blocked by debris, whom Wu has the mercenaries remove. Once the debris was removed, Wu, Hawkes, and Reed went into the building, with the latter two poking fun at the doctor for fearing his own dinosaur creations, while Dawson guarded the door. As they moved into the building, the group discover the Scorpios rex had escaped its confinements, forcing them to hasten their work. As Wu grew increasingly frustrated with being unable to find the laptop and begins rambling about perfecting the hybrids, Hawkes convinces him to search the other labs until he hears something crawling in the vents. Hawkes then decides to follow the noises from within the vents while sending the others outside, eventually finding Darius Bowman, Yasmina Fadoula, and Brooklynn with Wu's laptop and grabs the latter. While she's holding onto the vents, she hands the laptop to her friends and tells them to run off without her.

With Brooklynn captured, Hawkes drags her back to his group, where Dr. Wu recognizes her as a camper from Camp Cretaceous (camp) and realizes none of the campers ever made if off the island, while Hawkes informs them of the situation, and brings Reed in to help him track the escaping campers. They quickly catch up to the campers, so Hawkes distracts them while sending Reed over to capture them, only for Reed to bump into Chaos and Limbo the Baryonyx, who promptly kill him for the intrusion. Now unable to give pursuit, Hawkes warns Darius and Yaz that if they do not meet them at their helicopter and hand the laptop back in two hours, Brooklynn will not be released. Hawkes returns to his group and informs them of the plan, sending Wu to gather anything necessary from the lab. Dawson object to the plan, but is interrupted when a pair of Monolophosaurus investigating the hallway. The dinosaurs, lured into the lab itself by Brooklynn banging an umbrella, attack the group, a distraction Brooklynn initially uses in her attempt to escape before the pair turn their attention to her. Brooklynn eventually manages to escape outside the building and shut the door on the Monolophosaurus, but Hawkes and his team beat her outside using the vents she had been captured in. As the group head back towards the helicopter, they stop at a raging river that had overtaken the path, and decide to cross over on a wooden log. The group climb over the log, but Dawson slips and falls into the river as it's still wet from the earlier storm. The group move to rescue Dawson, but Hawkes stops them and he's quickly swept away. As they continue onwards, the group encounter a Parasaurolophus lux, which Hawkes is wary of until Brooklynn explains it's of no threat, to which Hawkes fires a shot in the air to scare it off and allow the group to continue onwards.

Hawkes, Wu and Brooklynn reach the helicopter in the morning where Brooklynn's friend and fellow camper Kenji Kon meets up with them to exchange the laptop and hands it to Wu. Just as Wu is checking the laptop however, fellow camper Ben Pincus leads his Ankylosaurus Bumpy and her herd to attack Hawkes and Wu were Sammy and Yasmina manages to get the laptop after Wu drops it by mistake. Hawkes attempts to keep Brooklynn away from her friends, but eventually loses her and sees another camper, Sammy Gutierrez, with the laptop. He manages to catch up to Sammy, but she throws the laptop into the air and its landing on the head of a passing Ankylosaurus and smashes it. Angered by the failure, Hawkes returns to the helicopter with Wu and begins chasing the kids in spite of Wu telling them another team had been successful in recovering a sample from the Indominus rex. Wu eventually realizes Hawkes plan, and convinces him to return to base as the campers are not part of their mission.

In the fifth season Hawkes is hired by Daniel Kon alongside another team of mercinaries to help him capturing dinosaurs for Biosyn much to the shock of Daniel's son Kenji who still dosn't realizes that his father is a bad guy like Hawkes and just thinks Daniel hired Hawkes because he is to gullible. During the final battle to free the island from Mantah Corp, Hawkes is eaten by Little Eatie.

Hawkes is a ruthless and impatient mercenary that will stop at nothing to finish the mission. In order to retrieve Wu's laptop, he captures Brookylnn and threatens not to release her if the laptop is not returned. He has no issues with threatening and intimidating Brooklynn. When two of the mercenaries die, Hawkes does not show any sympathy. Despite some other mercenaries in his group obtaining samples to the Indominus rex, he still tries to pursue Brooklynn and the other kids, possibly out of anger for destroying the laptop, but relents after being persuaded by Wu.

Hawkes does not appear to have any positive traits or redeemable qualities. The only positive aspect about him is not pursuing the kids again, but this was only after being persuaded by Wu. Despite being a minor character, Hawkes can be seen as one of the most evil people in the franchise like Kash D. Langford. 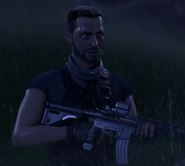 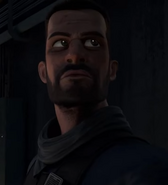