Helicoprion was a long-lived genus of extinct, shark-like eugeoneodontid holocephalid fish. Helicoprion lived from the late Carboniferous period to the Early Triassic. It is commonly known for its strange teeth that were arranged in a  "tooth whorl". It is estimated to grow 10-15 ft (3-4m) in length.

Helicoprion is a limited edition piscivore in Jurassic Park: Builder. 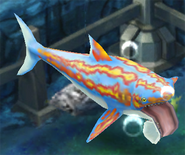 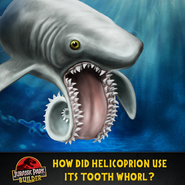 Helicoprion is an aquatic super rare surface in Jurassic World: The Game. 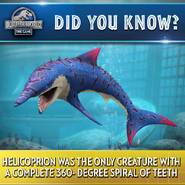 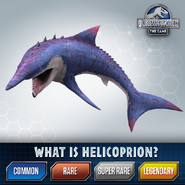 Retrieved from "https://jurassicpark.fandom.com/wiki/Helicoprion?oldid=209137"
Community content is available under CC-BY-SA unless otherwise noted.