"So what did you call those things that were chasing you? Hairy-saurauses?"
"Herrerasaurus, from the Triassic era. Now that we've bred them we can easily classify them as early theropod."
—Billy Yoder and Gerry Harding(src)

Herrerasaurus ("[Victorino] Herrera's lizard") was one of the oldest and most primitive Theropods, or meat-eating dinosaurs, though in its day it was relatively hyper-advanced. Its body displayed many of the same features of the later theropods. It walked on its hind legs, which sported feet with five digits each with the middle three being able to bear weight, and its arms ended in a long five-digit hand with the first three ending in powerful claws used for grasping prey. Its teeth - like those of most theropods - were shaped like blades and had knife-like serrations running up the front and down the back. Its lower jaw had a special hinge about halfway along its length. This joint would have helped Herrerasaurus to better hold on to struggling victims. Many later theropods also had this hinge. Some scientists consider the Herrerasaurus to be more carnivorous primitive member of the Prosauropoda family.

Although Herrerasaurus shared the basic body design of future rulers of the Earth (like Allosaurus, Giganotosaurus, and Tyrannosaurus), it lived during the Triassic period - a time when the dinosaurs were not the most powerful animals on Earth. Herrerasaurus would have had to run away from the much larger Saurosuchus, a giant land-dwelling crocodile relative, and the even larger Fasolasuchus tenax, which was the largest meat-eater in Argentina during the beginning of the Mesozoic era.

At least four Herrerasaurus were created by InGen inside their compound on Isla Sorna and shipped to Isla Nublar where they lived in their own paddock, but the animal was never seen on-screen.[1] On the map, Herrerasaurus‘ enclosure is located at the far northwestern end of the island where the tourist route does not connect. This population went extinct between the 1993 incident and the 1994 cleanup. InGen did, however, save 60% of its genome.[2]

Herrerasaurus apparently was subject to cruelty by 2018, although it is unknown if there are any surviving populations left.[3]

However, a fossil skull of Herrerasaurus is seen in Lockwood Manor in Jurassic World: Fallen Kingdom.

Herrerasaurus was created by InGen inside their compound on Isla Sorna[4] where they were taken care of by the workers there at a young age.[5] Dr. Laura Sorkin believed that they were created to be a "safe" alternative to Velociraptor, since the Raptors proved to be too difficult to handle and were said not to be as intelligent.[6]

Like all of InGen's cloned theropods, the Herrerasaur clones had pronated hands. They also lacked the fourth and fifth fingers that the animal had in life. The Herrerasaurus clones had a bright red body with dark red stripes, and white underbelly and some yellow patches. They roamed in packs[7] and their willingness to pursue their prey over long distances made them highly dangerous.[6]

When those on Isla Sorna reached a certain age, they would be shipped to the neighboring island Isla Nublar in the Herrerasaur Paddock of Jurassic Park, which was planned for Phase 1 of the park.[8]

At the time of the Isla Nublar Incident of 1993, the Herrerasaurus living in Jurassic Park were not fully grown.[9]

Herrerasaurus was in the Jurassic Park Brochure, as an attraction for Phase I.

When Dennis Nedry disabled Jurassic Park's security, Herrerasaurus, along with many other dinosaurs, were able to freely go outside of their paddocks.[10]

Herrerasaurus had very little involvement in the incident and farthest they were known to go outside of their paddock was the nearby Bone Shaker roller coaster.

This pack attacked Dr. Gerry Harding, his daughter Jess Harding, and their captor Nima as they try to use the Bone Shaker as a way down. They jump onto the roller coaster cars but are successfully fended off, thrown off into the jungle below.[7]

Herrerasaurus model as seen in Jurassic Park: The Game.

The actual size of Herrerasaurus

Herrerasaurus can be created in Jurassic Park III: Park Builder.

Herrerasaurus is listed on the Isla Sorna map seen in the game, but does not physically appear.

Herrasaurus can be seen in the lower right corner of the map, just above the Velociraptor.

Herrerasaurus was added to the game on April 17 in the Carnivore Dinosaur Pack.

A Herrerasaurus figure will be featured in a toy-line for Jurassic World: Fallen Kingdom. This has been the first time Herrerasaurus has ever physically appeared in a toy set. The toy varsity resemblance to the JP:TG version. 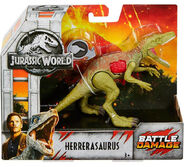 A Herrerasaurus figure from the Battle Damage set 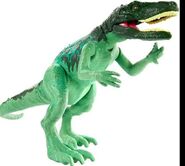 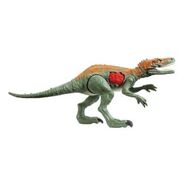 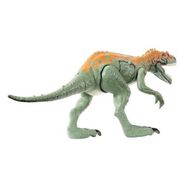 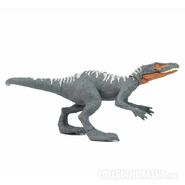 There is evidence that mosquitoes existed during the Triassic period around 226 million years ago. Scientists have found Amber from that period, meaning that Herrerasaurus must have been created using DNA from drops of blood or pieces of flesh preserved in amber (see DNA in Amber).

Bizarrely, the Herrerasaurus sounds in Jurassic Park: The Game seem to be a slowed-down version of the Velociraptor calls.

Gerry Harding claims the cloned Herrerasaurus are classed as early theropods. However, a study by Barron, Norman and Barrett has found that Herrerasaurus was more closely related to sauropodomorphs like Brachiosaurus.[11] That said, this study has much against it.