Heterodontosaurus ("different-tooth lizard") was a small, fast dinosaur with strong, grasping hands, long arms, and a powerful bite. Heterodontosaurus‘s most notable feature, however, is the set of "fangs" at the front of its mouth. It is quite unusual for a plant-eating dinosaur to have teeth like this, which you'd normally expect in a carnivore.

We know of only one other Early Jurassic group of dinosaurs -the prosauropods- where some of its members had teeth structurally intermediate between those of carnivores and of herbivores. The same may be true here. Heterodontosaurus and prosauropods both might be examples of the transition from carnivores and herbivores.

The skull of Heterodontosaurus appeared in the stones of the Visitor Center. 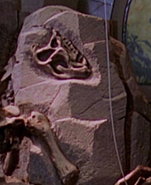 Heterodontosaurus is nr. 077 of the Herbivore Ones that can be created in Jurassic Park III: Park Builder.

Retrieved from "https://jurassicpark.fandom.com/wiki/Heterodontosaurus?oldid=261803"
Community content is available under CC-BY-SA unless otherwise noted.