The Triceratops hybrid is a large fully upright humanoid with green skin. It has three toes with a space between the big toe and its other two toes. Because of its humanoid body, the horns are located on top of its head with its frill is positioned horizontally rather than vertically with Triceratops. Physically, this hybrid has one of its horns is broken and possesses a visible scar across its left arm.

The giant Tyrannosaurus hybrid, like the Triceratops and Velociraptor hybrids, stood fully upright. It had a reddish color scheme, with some faded brown mixed with tints of faded charcoal black on the back of this creature. It had a short tail, which would make sense, since this hybrid stood upright, like a man. However, on both of its feet, it had two toes. Its hands also had two fingers, which is accurate, since its base genome had two fingers as well, but the arms of this hybrid were huge, and much more man-like. The skull is very much like that of the Tyrannosaurus, only with a spike coming out of the back of its head. 3 spikes also come out of the top of the back of this hybrid as well.

The Velociraptor hybrid had multiple designs made of it, more so than any of the other hybrids to date. Carlos Haunte, who is known have designed several concepts of the raptor hybrids, called one of the concepts "raptorman" in a now-deleted Instagram post,[1] meaning that "raptormen" could be the name of these hybrids. 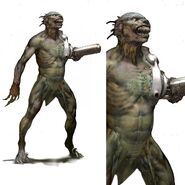 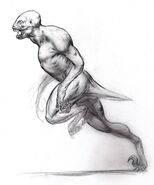 Similar monsters were used back in 2002, during Univers Studios' Halloween Horror Nights' Islands of Fear, in the Scarezone JP Extinction and the Haunted House Project Evilution. In them, a hideous accident resulted in the park staff turning into human/dinosaur hybrid mutants.

The earliest known concept art of the human-dinosaur hybrids was created by Carlos Huante from 2002 approximately.[2] According to Jack De La Mare, creator of the fan site Jurassic Outpost, he contacted Huante about why the hybrids were scrapped, to which Huante told him that as soon as the heads of Amblin Entertainment saw the concepts, they shut down the project "almost instantly".[3]

The earliest public knowledge of these hybrids was during October, 2003, in an interview with Jack Horner on the Minnesota Public Radio's Midmorning show. A caller asked Horner about the The "Dinosauroid", a conjectured evolutionary descendant of Troodon that had a humanoid appearance. Horner replied telling the caller to "keep thinking about that for a couple years" before further telling him to go see Jurassic Park IV.[4]

Retrieved from "https://jurassicpark.fandom.com/wiki/Human-dinosaur_hybrid?oldid=270480"
Community content is available under CC-BY-SA unless otherwise noted.