Jurassic Park: Builder
Jurassic World: The Game
Hyaenodon ("Hyena-Tooth") is the type genus of Hyaenodontidae, a group of extinct carnivorous afrotheres endemic to Eurasia, North America and Africa, with species existing temporally from the Eocene until the middle Miocene, existing for approximately 26.1 million years. The various species of Hyaenodon competed with each other and with other hyaenodont genera (including Sinopa, Dissopsalis and Hyainailouros), and played important roles as predators in ecological communities as late as the Miocene in Africa and Asia. Species of Hyaenodon have been shown to have successfully preyed on other large carnivores of their time, including a "false saber-tooth cat", Dinictis by analysis of tooth puncture marks on a fossil Dinictis skull in North Dakota.

Hyaenodon can be created in the Glacial Park of Jurassic Park: Builder. It is obtainable in Tournament Mode. 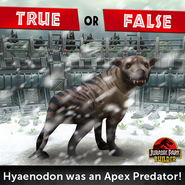 Hyaenodon was added as a Solid Gold pack Cenozoic cavern on November 21st, 2017 in Jurassic World: The Game.