Seas all over the world

Hybodus ("Humped Tooth") is a type of prehistoric shark which lived from the Permian to the Cretaceous period. It had 2 horns on its head and it had a bony blade on their dorsal fin for defence. Hybodus species grew to about 2 metres (6.6 ft) in length. The first fossilized teeth from Hybodus were found in England around 1845. Since then teeth (and dorsal spines) have been recovered from around the world. The mouth was not large, and rather than ruthlessly hunt large prey, Hybodus, was capable of eating a wide range of foods. They had two different types of teeth, suggesting a wide diet. The sharper teeth would have been used to catch slippery prey, while the flatter teeth probably helped them crush shelled creatures.

Hybodus can be created in Jurassic Park: Builder at the Aquatic park, although it requires dino-bucks. 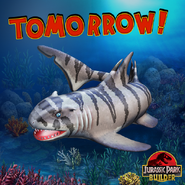 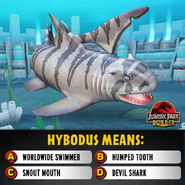 Retrieved from "https://jurassicpark.fandom.com/wiki/Hybodus?oldid=238127"
Community content is available under CC-BY-SA unless otherwise noted.