Hyneria was a large lobe-finned fish that lived in Late Devonian North America. Its fossils were found in Hyner, Pennsylvania.

Hyneria can be created in the game. At first, it could only in the Aquatic card packs purchasable by real money. Since March 25th 2016, it became a DNA tournament limited edition. It uses the same animations as the Kronosaurus, rather than any of the other fish species available for creation. 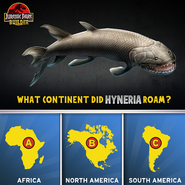 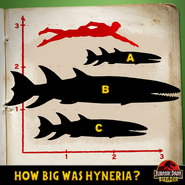 Hyneria appears as a legendary cave in Jurassic World: The Game.

Fully maxed
Add a photo to this gallery
Retrieved from "https://jurassicpark.fandom.com/wiki/Hyneria?oldid=234642"
Community content is available under CC-BY-SA unless otherwise noted.