Ichtyostega is creatable in Jurassic World: The Game as a legendary amphibian.

Ichtyostega is unlocked by completing battle stage 50. Additional individuals can be purchased in the market with 3,330 DNA or found in card packs.

A level 40 Icthyostega can be fused with a level 40 Rajasaurus to create the hybrid Rajastega.

"Did you know that its name is Greek for 'fish roof'? The Ichthyostega has lungs as well as gills!"

"The Ichthyostega has a mixture of amphibious and fish-like features, including webbed feet and a fin on its tail!"

"Although its head resembles that of a fish, the Ichthyostega's long body and legs allow it to walk on land!"

"At 5 feet in length, am adult Ichthyostega is as long as a modern boomslang!" 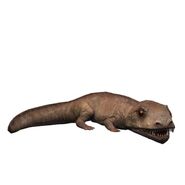 Ichthyostega Max Stats
Add a photo to this gallery
Retrieved from "https://jurassicpark.fandom.com/wiki/Ichthyostega/JW:_TG?oldid=231827"
Community content is available under CC-BY-SA unless otherwise noted.