InGen Security Division is a security force established by InGen to originally protect Jurassic Park. After Masrani Global Corporation acquired InGen the company was reinvented into one of the most recognized paramilitary organizations and making the new dinosaur park Jurassic World the safest theme park on earth.

The InGen Security Division was founded in 1993 or before[1]as a small security firm.[2] Their only known task at the time was to protect InGen's ambitious project Jurassic Park.[3].

InGen Security guards accompanied game warden Robert Muldoon in transporting a vicious Velociraptor to the Raptor Pen after multiple members of the Velociraptor Paddock were killed by The Big One. When the gatekeeper, Jophery, raised the gate of a Velociraptor's containment unit, the raptor slammed herself against the wall of her enclosure releasing a violent vibration that pushed Jophery off the top of the cage and onto the ground. He landed near the opening of her enclosure where the raptor proceeded to drag him into the cage. Despite efforts from Robert Muldoon to save him, the Velociraptor killed Jophery, which caused Robert to command the Security team to tase her into submission. This incident caused InGen to invite Dr. Alan Grant, Dr. Ian Malcolm, Dr. Ellie Sattler, and lawyer Donald Gennaro to inspect Jurassic Park to see if it was safe for visitors. After the unfortunate incident with Jophery InGen Security guarded the new enclosure for the Velociraptors.[3]

InGen Security personnel probably evacuated Isla Nublar by boarding the boat C-3208[4] before the tropical storm that occurred on the first night of the Jurassic Park Incident hit.[3][4]

When the S.S. Venture crashed into the dock Waterfront Complex unexpectedly, a guard named Berner accompanied InGen CEO Peter Ludlow in going inside the ship to investigate the cause of the crash where the two discovered that all the crew members had been killed. Another guard named Jerry prevented Gatherers, Dr. Ian Malcolm and Dr. Sarah Harding, from going inside the ship. But Jerry is most remembered for foolishly released the Tyrannosaurus rex that the cargo ship was holding. Many InGen Security guards fled from the Waterfront Complex as he freely roamed the area.

During the Tyrannosaur Buck's rampage throughout San Diego, California, InGen Security members tried to stop the Gatherers from getting inside Jurassic Park: San Diego, but their car smashed through the crossing gate. The security quickly met up with them after they had retrieved the Infant T. rex and threatened to stop them, only for Dr. Ian Malcolm and Dr. Sarag Harding to respond to the threat by quickly driving off to the InGen Waterfront Complex before any action was done to them.[5]

Masrani Global Corporation acquired InGen as well as its security division in 1997. InGen Security protected construction workers on Isla Nublar from its wildlife from 2002-2004 during the construction of Jurassic World, which they have protected as well ever since its opening.[6] Simon Masrani, CEO of the Masrani Corporation, personally hired Vic Hoskins because of how well him and his team handled the "clean up" of three escaped Pteranodons from Isla Sorna who had traveled to Canada in 2001. Under Vic Hoskins, the InGen Security Divison went from a small, private security firm into a paramilitary organization. They gained a partnership with the United Nations Security Council and has kept a watch on Isla Nublar, Isla Sorna, and their neighboring islands to prevent poachers and the prehistoric fauna from escaping ever since this partnership. [2]

In 2007, InGen Security developed the CT-model drones with Masrani subsidiaries Aerospace Dynamix and Mascom. In 2012, InGen's Security Division initiated the IBRIS Project that has lasted since this year. In 2014, Jurassic World, whom the security division protects, was said to be "the safest theme park on earth". From 2014-2015, InGen Security was involved in stopping the increase of Central American poaching vessels on the Muertes Archipelago with the most recent operations conducted in the Gulf of Fernandez.[2] Simon Masrani approved a $225 million boost in funding for InGen Security on January of 2015.[7]

An Asset Containment Unit team consisting of Katashi Hamada, Lee, Craig[8], Meyers[9], and several others were called to stop an Indominus rex's rampage. During their pursuit, she attacked the team with her known victims being Katashi Hamada, Cooper, Craig, Lee, Miller, and Spears.

Simon Masrani flew two members in the helicopter JW001 outfitted with an M134 Minigun in an attempt to kill the hybrid. All three men were killed and the helicopter was destroyed when they followed the I. rex into the Isla Nublar Aviary where they were attacked by the flying reptiles inside the aviary after the Indominus smashed through it, releasing them in the process.

Many other InGen Security soldiers were involved in the incident, including the take down of the Pterosaurs. Some of the squad members were commanded by Owen to make a formation and shoot down each flying reptile one at a time on Main Street, but all of them got distracted when a Dimorphodon attacks Owen, leading to Claire picking up a gun and taking it down herself. When Vic Hoskins calls in reinforcements, they arrive in boat and helicopter. They're commanded by a balding contractor who seems to serve as their commander. A bearded trooper is seen shooting a Dimorphodon dead into the sea on the helicopter ride over to Isla Nublar. A squad accompanied Barry and Owen Grady in their plan to stop the Indominus rex. However, the raptors turn on them, and every member is seemingly killed. Another soldier was killed by Charlie.[8] Charlie is than blown up by another soldier in retaliation while she's being distracted by the presence of Owen. The trooper who shot the Dimorphodon runs up to Claire's van screaming and gets mauled by Delta.

The Asset Containment Unit's main role seems to make sure none of InGen's cloned prehistoric wildlife escapes their enclosures. They used a type of rifle as one of their weapons and have camera technology in their uniforms that tracks their vitals and what they are seeing. Two teams led by Katashi Hamada and Austin were called to stop the Indominus rex when she broke out.

Despite their training and preparations, the ACU was unable to contain the escaped Indominus-Rex after they were caught unprepared by its ability to camoflauge itself. The Indominus single-handedly wiped out the entire unit.[9]

As the earliest unit known, the intention of this unit was to defend Jurassic Park. Compared to the units that were established later in InGen Security's life, Jurassic Park Security had basic equipment and a basic uniform. They wore a blue jumpsuit and an orange hardhat with the Jurassic Park logo on it. Their armament consisted of electric prongs and M16-like rifles fitted with under barrel flashlights.

This unit was disbanded after Jurassic Park was cancelled and was succeeded by the Jurassic World Park Rangers.

The Jurassic World Park Rangers are the successor of the Jurassic Park Security unit. Not much is known about this unit outside of its primary goal to protect Jurassic World and its guests. They are armed with the same rifles the Asset Containment Unit has, both lethal and nonlethal.

In the introduction of the "Human Hunter" level of the PSX game The Lost World: Jurassic Park the files of the members; guard dog trainer M. From, weapon specialist M. Heilemann, security officer J. Ingliasias, and Marksmen 1st Class R. Oyler, are briefly seen. However, the division does not physically appear in the game.

The Jurassic Park Security unit appears in the game LEGO Jurassic World in a reenactment of the famous opening sequence to the film Jurassic Park. Asset Containment Unit also appear in the game.

Vic Hoskins, head of the division, provides the player missions in Jurassic World: The Game. Asset Containment Unit offices can be built as well.

An Asset Containment Unit trooper is a playable character in LEGO Dimensions. He can only be unlocked by purchasing the Jurassic World team pack.

The ACU is used to tranquilize, transport, sell, and remove dead dinosaurs. 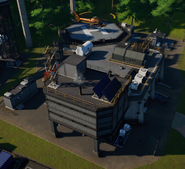 Action figures of InGen Security are included with some battle packs of the Jurassic World toyline.

At the time of Jurassic Park: The Ride's opening, Jim Boutcher was the director of InGen Security. During his time as director InGen Security held many of the company's strings. Some of their plans included discrediting a high-ranking employee within the company and secretly feeding the park's Brachiosaurus because they were an unpopular animal.

Retrieved from "https://jurassicpark.fandom.com/wiki/InGen_Security_Division?oldid=262410"
Community content is available under CC-BY-SA unless otherwise noted.