Indominus rex is creatable in Jurassic World: The Game as a Legendary Hybrid carnivore. An additional Gen 2 version was added in December 20th, 2019.

A level 40 Indominus rex can be fused with 4000 Velociraptor Super-DNA to create the superhybrid Indoraptor.

"Did you know that the name Indominus rex means 'fierce' or 'untamable king'?"

"The birth of the Indominus rex was achieved by genetically modifying existing DNA in the Hammond Creation Lab."

"The distinct head ornamentation of the Indominus rex is an ultra-tough bony osteoderm that protects the cranium from attackers!" 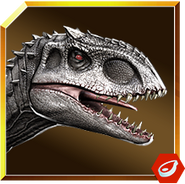 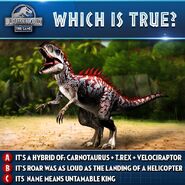 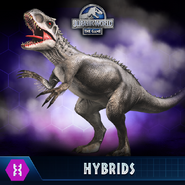 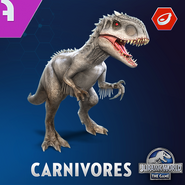 GEN 2 max stats
Add a photo to this gallery
Retrieved from "https://jurassicpark.fandom.com/wiki/Indominus_rex/JW:_TG?oldid=258305"
Community content is available under CC-BY-SA unless otherwise noted.