Indominus rex is one of the 20 dinosaurs featured in the video game LEGO Jurassic World. It is a hybrid of several dinosaurs, including Tyrannosaurus rex and Velociraptor.

Indominus first appears in the level "Welcome to Jurassic World" where it escapes by setting a trap for Owen Grady, Ellis, and her paddock supervisor Nick, to which she successfully her paddock when Owen and Nick open her paddock to evade her. The Indominus then goes to the Gyropshere Valley in the level of the same name where she chases Gray and Zach Mitchell in their Gyrospheres.

She manages to damage Gray's Gyrosphere severely but becomes preoccupied focused on fighting an Ankylosaurus before she can Gray and his brother. The I. rex ultimately loses the fight as the two brothers help the Ankylosaurus win the fight though this loss allows her to continue her pursuit of the Mitchells, destroying Zach's Gyrosphere and pursuing them once more now that they are on foot, though they evade her.

In the level "Out of Bounds", the Indominus attacks the Visitor Center when Owen and Claire enter it, destroying the only way of escaping the center causing them to find another way of getting to the escape route while bypassing the hybrid's attacks.

In the following level "Under Attack", Indominus becomes the leader of Owen's Velociraptor pack to which she orders her new subordinates to attack him, Barry, and the InGen mercenaries. When Owen and Barry find the last mercenary that needed to be saved, the hybrid sneaks up behind the man and grabs him while he was distracted by Blue. However, the mercenary is saved by Owen and Barry when they scare away Blue and fire a pump-rocket at the Indominus, causing her to drop the InGen merc.

Indominus rex makes its last appearance in "Main Street Showdown", the last level of the Jurassic World story. She enters Main Street after Owen Grady reestablishes his relationship with his raptor pack. Charlie and Echo confront the hybrid while Blue and the humans help Gray get on top of the amber bricks to take photos of the hybrid twice, using the flash from his camera to irritate the hybrid. In response to each irritation, the hybrid would roar loudly destroying the amber bricks, revealing parts to build a stuffed animal launcher.

The humans build this stuffed animal launcher and fire it at the I. rex mouth giving several times, each time giving Charlie and Echo the chance to attack the hybrid as she struggles to cough out each plush toy fired at her. Eventually, Claire releases the Tyrannosaurus rex being kept in Jurassic World which joins the fight against the hybrid. During the fight, the Tyrannosaurus becomes overpowered by the hybrid, but Charlie and Echo pounce on the Indominus, which distracts it so the T. rex can back at its feet, though the two raptors are flung out of Main Street by the large hybrid.

Ultimately, the Tyrannosaurus rex pushes the Indominus near the edge of the Jurassic World Lagoon where the Mosasaurus living there jumps out of the lagoon and pulls the hybrid under the water while she is distracted by the flare used to attract the T. rex.

In the ending to the Jurassic World levels, the Indominus rex is seen playing cards with Zara and several other Jurassic World workers inside the Mosasaurus' stomach.

The amber that unlocks Indominus is found in the level "Out of Bonds". The boneboxes of that level can be collected to unlock the skeleton skin for the hybrid as well. 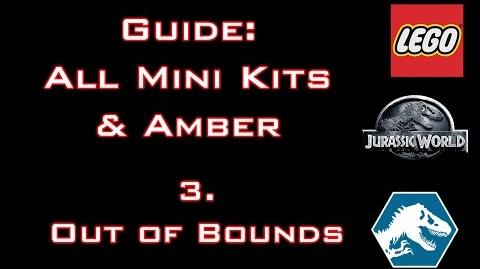 As a playable dinosaur, Indominus can let out a loud roar that can smash amber objects like Tyrannosaurus rex and Spinosaurus. But it has one characteristic that is exclusive to her, the ability to camouflage.

Retrieved from "https://jurassicpark.fandom.com/wiki/Indominus_rex/LEGO?oldid=232878"
Community content is available under CC-BY-SA unless otherwise noted.