"We planned to open in May but Asset Containment insisted we build the walls up higher."
—Claire Dearing(src)

The Indominus rex Paddock, codenamed Paddock 11, was the most recent attraction of the dinosaur park Jurassic World. As the name suggests, visitors can view the genetic hybrid Indominus rex. As a security measure, thermal cameras are used to monitor the attraction.

The enclosure we see in the film was supervised by a Jurassic World employee named Nick Letting although it required minimal human oversight beyond him and a few workers. The one we see in the movie, however, is not the actual paddock that guests in the park would've seen the Indominus in. The one we see in the movie is a Holding Pen for the Indominus. It was where she would grow and they would observe her. If all went well, they would transport her into a new paddock for the public. The paddock for the Indominus, for the public that is, was going to have huge Double Helix Staircases leading up to bleachers. From the bleachers, guests could watch the Indominus tear apart and devour a huge slab of meat. They could probably watch her do other things as well.

Problems delayed the paddock's completion. It was originally intended that it would be finished in May, but the ACU insisted the walls be built higher because of how large Indominus had grown. Furthermore, Indominus was originally hand fed by workers until one of the men almost lost an arm. The workers threatened to quit unless Claire could guarantee their safety, and so the hybrid was fed using a Terex crane that raised and lowered steers for her to eat.

At some point during the Isla Nublar Incident of 2015, Indominus clawed up the wall and hid her thermal signature to fool personnel into believing she'd scaled the wall and escaped. Waiting until Owen Grady entered the enclosure with Letting and a worker named Nick Kilgore through the front door, she ambushed the three humans. As they attempted to flee back to the front door, Indominus blocked their path, grabbing and eating Kilgore.

With no other way out, Nick Letting used his security code to open the larger back door and ran out. This triggered a security breach alarm, and a concerned Simon Masrani ordered Lowery Cruthers to remotely shut the door to prevent the hybrid from escaping. As Indominus finished devouring Kilgore, Owen ran for the slowly closing door and dove through it to perceived safety, only for Indominus to slip through, as well, damaging the concrete door frame and knocking the door off of its track.

After killing Nick Letting, who'd hidden behind a truck, and failing to locate Owen, who had hidden underneath a crane, the hybrid fled into the jungle.

Back door as seen on security camera.

The paddock as seen on the tracking system.

The paddock's location on the Control Room map.

Claw marks by the door as seen from the Observation Tower. 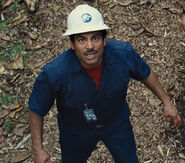 I. rex just outside of her paddock 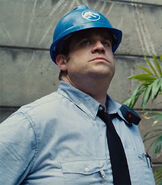 Nick Letting just outside the paddock

The second half of the level "Welcome to Jurassic World" takes place primarily in the Indominus rex Paddock.

The paddock can also be explored in the Jurassic World hub.

Add a photo to this gallery
Retrieved from "https://jurassicpark.fandom.com/wiki/Indominus_rex_Paddock?oldid=220977"
Community content is available under CC-BY-SA unless otherwise noted.