"A creature of the future, made from pieces of the past! Ladies and gentlemen, please be warned! This is the perfect blend of the two most dangerous creatures, that ever walked the Earth! We call it... the Indoraptor!"
—Gunnar Eversol introducing the Indoraptor to auctioneers(src)

The Indoraptor was a new hybrid dinosaur that was created secretly by Dr. Henry Wu in the Lockwood Manor basement lab, and the final antagonist of Jurassic World: Fallen Kingdom.

"What is that thing?
They made it."
—Maisie Lockwood and Claire Dearing(src)

The Indoraptor was created in a hidden laboratory in the Lockwood Manor. He was another one of Dr. Henry Wu's creations, similar to the Indominus rex. He was a prototype as Wu was waiting to obtain Blue's blood to finalize the genome of the creature, and breed a more streamlined version of him. He was created to be a weapon and was shown to attack on command through the use of visual and audio frequency, which would drive him into a frenzied state.

However, due to being a prototype, he lacked any of the positive characteristics Wu wanted to create in him: He lacked an ability to follow orders other than his conditioning to visual and audio cues, and lacked any of the positive personality traits seen in Blue, such as her ability to show empathy and bond with a trainer or handler. As such, Blue was a required part of the finalized Indoraptor design, as she was needed to act not only as the DNA source, but also as the mother figure for the next generation of Indoraptors to imprint on and learn positive behavior from.

"The perfect weapon for the modern age! Built for combat! With tactical responses more acute than any human soldier!﻿"
—Gunnar Eversol(src)

The Indoraptor bears a striking similar appearance of the Indominus rex, but his body length is about half of that of his predecessor. He sports toe claws that are similar to those of a Velociraptor, and his color is primarily black with a golden-yellow streak running from the base of the neck to his tail, which bears strong resemblance to Blue's metallic blue streak. Like the Indominus rex, the Indoraptor possesses hands with four fingers; an opposable thumb and three main digits.

The shape of its head bears a resemblance to that of a Tyrannosaurus rex, and he has a sprinkled red mark around the eye orbit. The skin around the Indoraptor's mouth is flaky and peeling away in some areas, possibly a result of genetic instabilities inherited from the source materials used to create him. His mouth is also sickly-looking, with ragged teeth similar to those of the Indominus rex.

He prefers a quadrupedal stance, though he can stand, walk, and run bipedally on occasion.

The Indoraptor also exhibits night vision, allowing for it to perform well regardless of the time of day, or lighting condition it's pushed into. Indoraptor also has echolocation to track his prey in the dead of night. The individual seen in Jurassic World: Fallen Kingdom was a male.

During Maisie Lockwood's sneaking into the laboratory sub-level where Dr. Wu and Eli Mills were conversing over the Indoraptor's faults, Maisie hid in a darkened hallway that led to the Indoraptor's cage. Unknowingly getting too close with her back to the hybrid's enclosure, she did not see the Indoraptor reach out to try and grab her, only to be alerted when one of his claws brushed her ponytail, causing her to run away screaming, leading to her being caught and confined to her room by Mills.

During the Lockwood Manor Auction, the Indoraptor was introduced to a crowd of wealthy people who've come from all over the world to buy the dinosaurs who were evacuated from Isla Nublar. Unfortunately, the dinosaur isn't up for auction as he's only in the prototype stage, but it doesn't stop the audience from bidding ridiculous amounts of money on the hybrid. Gunnar Eversol begins to accept bids at the behest of Eli Mills, with Russian mobster Anton Orlov winning the bid. Owen Grady then shows up with a Stygimoloch and together they cause havoc, with Owen and the Indoraptor sharing a close glance at one another.

The place empties, leaving only Ken Wheatley with the Indoraptor. He attempts to sedate the dinosaur, shooting him twice with tranq darts, causing him to fall over, seemingly incapacitated. He then enters his cage with the plan of taking one of his teeth for his collection.

The Indoraptor turns out to only be faking his sedation, and remains motionless for a brief time. He then smirks just before he rises, literally disarms Ken, and begins to maul and kill him. He escapes from the cage and then his tail breaks the elevator that Gunnar Eversol along with three other members from the auction were trying to escape in.

The Indoraptor roars at Gunnar Eversol as he kills him and the other members off-screen. Moments later, he attacked and killed two of Eli Mill's guards. Owen Grady, Claire Dearing, and Maisie Lockwood run into the Indoraptor while trying to cross the main floor in the Lockwood Manor.

He chases after them and separates Maisie from Claire and Owen, injuring Claire in the process. The Indoraptor pursues Maisie as she runs towards her bedroom. He then climbs into her room through the window and is about to snatch her from her bed when Owen shows up, armed with a gun he'd taken from a dead mercenary. He fires two rounds at the Dinosaur but it doesn't do much, bar stunning him for a brief time. As he approaches Owen, ready to attack, Blue arrives and begins to assault him, keeping him occupied while Owen and Maisie escape through the window.

The Indoraptor pushes Blue out the window, with the two being separated from their fight, and he corners Owen and Maisie on the roof. Claire arrives behind it and points a laser at Owen, prompting him to attack, in an attempt to get him to fall through weakened glass. He moves and begins to fall through the glass roof, but manages to save and haul himself back up.

The Indoraptor then recovers and moves to lunge towards Owen when Blue arrives once more and resumes her attack, with both tumbling through the glass in a deadlock grapple. Once they land, the Indoraptor gets impaled by the brow horns of a Agujaceratops skull[4] and perishes within seconds. Blue sprints away, triumphant, with the body of the hybrid being left behind on the ceratopsian skull.

It is unknown what happened with the hybrid’s body, but he was mostly likely disposed of, alongside the technology to create more Indoraptors in the fallout of his escape. 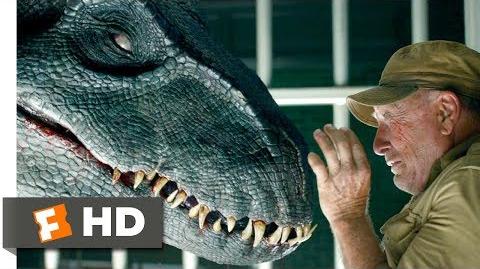 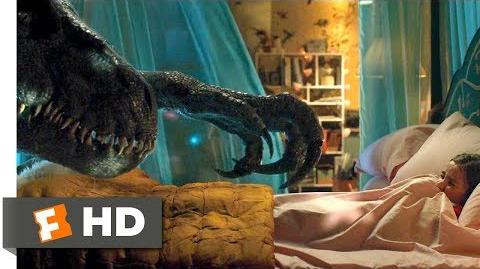 Clip Art
Add a photo to this gallery 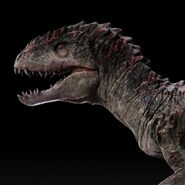 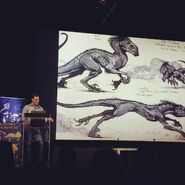 Retrieved from "https://jurassicpark.fandom.com/wiki/Indoraptor?oldid=265263"
Community content is available under CC-BY-SA unless otherwise noted.