Iris Carroll was an English housekeeper of the Lockwood Manor, the former nanny of Maisie Lockwood and the keeper of all the family's secrets. She was a longtime employee of Sir Benjamin Lockwood and served that role right until his death.

She was portrayed by British-American Spanish based actress Geraldine Chaplin.

Iris has been the housekeeper of the Lockwood family for many years. The exact date of when she was hired is not known but she has worked for Sir Benjamin long enough to raise both his daughter and "granddaughter" from their respective births.

Lockwood's daughter, Maisie, was raised by Iris at Lockwood Manor. At one point, the two took a photo together which became a memento of Sir Benjamin. Iris was successful in raising Maisie from childhood into a young woman and saw her marry an unnamed man for a husband. However, tragedy struck when in the mid 1990s, Maisie and her husband were killed in a car accident. The event devastated Sir Benjamin who in his grief, began to try and bring his daughter "back" through cloning. Iris helped keep Sir Benjamin's secrets over the matter and years later in 2009, Lockwood's "granddaughter" Maisie Lockwood was born.

Iris helped Sir Benjamin in raising his "grandchild" as she knew the original best, understood her interests and sense of humor. Iris also subtlety helped the new child be closer to her original through teaching her a "Queen's English" accent. Another reason for her aid in helping raising Maisie was Sir Benjamin's declining health in his older age which left him unable to walk.

Iris, a devoted servant of the Lockwood family, has attended to Maisie Lockwood since her birth/creation and views her as a surrogate daughter, carrying on from the first girl that perished in an accident. She is somewhat strict with Maisie, insisting on proper posture and use of "Queen's English", but evidently cares deeply for her well-being. For her part, Maisie entertains herself by stalking and startling the housekeeper repeatedly in the diorama room.

She was fired by Eli Mills after he murders Benjamin Lockwood in cold blood, disregarding her pleas that she is the only one who can take care of Maisie, reiterating that she raised both her and her "mother". She presumably departs the mansion shortly before the dinosaurs break out, though her ultimate fate is unknown. 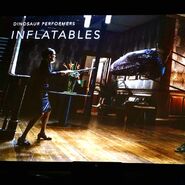 Iris was portrayed on screen by British-American Spanish based actress Geraldine Chaplin, the daughter of a iconic and legendary classic actor, Charlie Chaplin. Besides being his daughter, Geraldine is descended from several key figures who worked on stage and in early film. Born in Santa Monica, Geraldine Chaplin lives in Spain and is a frequent collaborator of Spanish director Juan Antonio Bayona. Bayona described her as his "good luck charm".