Irritator was the first spinosaurid discovered in the Americas. It is from South America (specifically Brazil) moreover, which had been connected to Africa at this time. As the name suggests, something was irritating about Irritator. This was because the people (fossil 'poachers') who discovered its skull added fake bits and rendered it with plaster of paris to make it look prettier, and the team of Paleontologists led by British Paleontologist Dr. David Martill (Lecturer at Portsmouth University) got irritated trying to work out what was fake and what was genuine, as well as the cleaning up needed to be done on the plaster of paris which in itself was very time consuming and ultimately should not have had to be done.

Irritator was 6.1-10 meters (20-33 feet long) and perhaps have weighed up to 4 tons. Its diet is mainly fish. A remarkable pterosaur fossil from South America of a section of neck vertebrae from Anhanguera, has a bite mark and embedded tooth - which is of a spinosaurid and likely belonged to Irritator or a relative. This shows Spinosaurs could actively attack even highly agile and aerially mobile animals like pterosaurs, not just hunt fish. Adding this knowledge to that we know of spinosaur bites and teeth in relation to juvenile Iguanodon from England (Baryonyx and Becklespinax as the culprits) then we can build a picture of spinosaurs as not just being fish eaters. They could hunt dinosaurs and Pterosaurs as well.

Irritator's binomial name, challengeri, refers to the character Professor George Edward Challenger of the original novel by Sir Arthur Conan Doyle on 'The Lost World', as his famous fictitious expedition was to a South American plateau, something which evokes similar thoughts when studying this South American Spinosaur.

Irritator can be created in Jurassic World: The Game as a rare carnivore. Since January 11th, 2016, a fully maxed Irritator could be mixed with a fully maxed Diplocaulus to make the hybrid Diplotator. 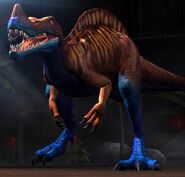 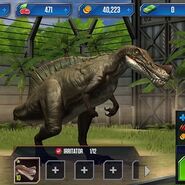 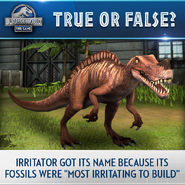 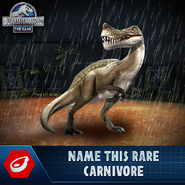 Irritator and its Gen 2 appears in Jurassic World: Alive. 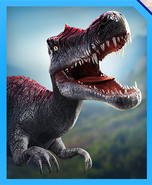 An Irritator figure will be featured in a toy-line for Jurassic World: Fallen Kingdom. This will be the first time it has ever physically appeared in a Jurassic Park toy set. Its color scheme is mostly brown with a dark green head, neck, and sail and blue-green blotches on the neck and sail.

Irritator in Jurassic World: The Game has an error with its head. It has a form of horn or bump at the front of the snout when it should have a crest towards the back of its head.

In 2018, Aureliano and colleagues presented a possible scenario for the ecosystem of the Romualdo Formation. The researchers proposed that spinosaurines from the formation may have also preyed on terrestrial and aquatic crocodyliforms, juveniles of their own species, turtles, and small to medium-sized dinosaurs. This would have made spinosaurines apex predators within their particular ecosystem. [1]