Start a Wiki
watch 01:46
The Loop (Movies)
Do you like this video?
Irritator is a Rare dinosaur in Jurassic World: Alive with a Common GEN 2 variant added with the worldwide release on March 18, 2018.

It is an Arena Exclusive creature unlocked in the Badlands Arena.

The Irritator's name describes the feeling of the paleontologists who had to spend many hours restoring its skull. This pesky creature is actually a relative of the vicious Spinosaurus!

This pale Irritator may have developed its unique coloring to camouflage in a grassland environment. More data on the creature's behaviour in the wild is needed to confirm this theory. 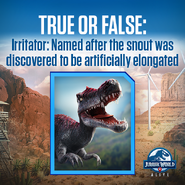 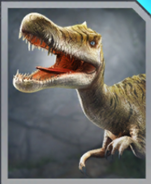 Add a photo to this gallery
Retrieved from "https://jurassicpark.fandom.com/wiki/Irritator/JW:_A?oldid=225099"
Community content is available under CC-BY-SA unless otherwise noted.