Severely damaged from the eruption of Mt. Sibo in 2018.

"I own an island. Off the coast of Costa Rica."
—John Hammond(src)

Isla Nublar was a remote island 120 miles west of Costa Rica and 87 miles east of the Muertes Archipelago. The island has a surface of 77 square kilometers with mountain ridges which created varied ecological niches.[1] Coordinates for the island are 9°48'11.4"N, 88°36'42.9"W, according to Dinotracker.com.[2]

The island was intended to be the site of Jurassic Park, a tourist attraction featuring living biological dinosaurs cloned from prehistoric DNA. However, the park was closed and abandoned before it could open due to multiple containment breaches in 1993, but was later reclaimed and successfully served as the site of a new tourist park, Jurassic World, which opened to the public in 2005. After over ten years of successful operation, another containment breach by the Indominus rex in 2015 resulted in the destruction of the park and the abandonment of its dinosaurs, along with six kids who were attending an adventure camp.

In 2018, the island's volcano, Mt. Sibo roared to life, threatening to destroy all living things on the island. During the subsequent eruption, however, a team of mercenaries hired by Eli Mills recovered many species of dinosaurs, intending to sell them at auction. The island was subsequently abandoned and is now a burned up raging inferno island and a volcanic barren wasteland of its former self, the same fate that it shares with its 1990 novel counterpart.

Isla Nublar has the shape of a reversed teardrop. The precise geography of the island is shown in satellite imagery in the Jurassic Park Control Room (image featured far left below). Various other maps such as the maps featured in the brochure, the Tour the Island site and Jurassic World map show a stylized cartoon version of Isla Nublar and therefore give only vague detail to the island's topography. 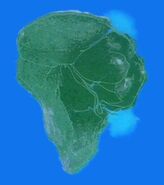 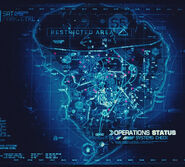 There is continual range of highlands along the western coast of the island, called the Western Ridge.[3] Velvet green cliffs and cascading waterfalls plummeting into deep, narrow valleys. From these mountains, one or more rivers stream to the eastern part of the island.

The northern part of the island is also very mountainous. This part is also very volcanic. One of the most impressive mountains on the island is called Mount Sibo. According to Jurassic World and the Dinosaur Protection Agency's website, the location of Sibo (and therefore Isla Nublar) is 10°, 24 minutes, 52 seconds North and 94°, 7 minutes, 3 seconds West.[4]

The Spanish navigator Diego Fernandez was the first European to discover the island in 1525. The naming of Isla Nublar is often credited to cartographer Nicolas de Huelva. While mapping the western coast of Costa Rica on the Spanish carrack La Estrella (The Star), de Huelva described seeing a "cloud island" ("Isla Nublar"). The history of the island, is also mentioned on the Masrani website.

In 1985, after John Hammond abandoned the idea of a small Jurassic Park: San Diego, his company InGen looked for a large isolated preserve. Costa Rica agreed to lease the island to InGen. In 1987, the last remaining Bribri Tribe descendant resettled off Isla Nublar. In 1988, construction began on Jurassic Park.[5]

InGen had to build two docks to easily transport supplies and workmen to the island, the East Dock. In the south the Isla Nublar Heliport was built. For an efficient distribution, a network of roads was built.

The structures for Jurassic Park were mainly built in the eastern and northern part of the island. When the Electric Fences around the paddocks were built, dinosaurs from Isla Sorna were transported to Isla Nublar.

During a tropical cyclone storm in 1993, Nedry hacked into InGen and uploaded a virus that shut down the electricity power and unleashed the dinosaur population onto the people on the island. In the end, 4 people, including Nedry, had died and all survivors were sworn to secrecy, although Malcolm went against this and tried to reveal what had happened only to become an outcast,[6] the island was kept from the public for years, until the San Diego Incident, although some people confused the two islands as one.

In 1994, an InGen clean-up team went to the island to perform an analysis of the incident and record the current state of the island's dinosaur inhabitants.[7] Their report, published in 1996, documented the state of the park and noted that while animal numbers were reduced, a relatively stable ecosystem had been established. They also recorded they had discovered the remains of adolescent Velociraptors (suggesting the presence of a sustained population on the island) and the presence of Compsognathus, a species bred on Sorna but which had never been transported to Nublar (it was suggested they hopped between islands via cargo ships).[7] The dubious legal status of the island ensured the Nublar population remained relatively undisturbed until the early 2000s when the Masrani Group began construction of the Jurassic World park.

In 2002, Simon Masrani, the new CEO of InGen following John Hammond's passing, built a new, much larger dinosaur theme park, Jurassic World, in the southern part of Isla Nublar. The park started off with 8 species of dinosaurs that possibly came from the original park, such as the Tyrannosaurus rex, but over the years the number of species on the island grew to 20,[8] both through cloning and transporting animals from Isla Sorna (the ecosystem of which had been irrevocably damaged by Masrani illegally cloning undocumented species such as the Spinosaurus and releasing them on the island[7]). Many of the buildings of the old park, like the Visitor Center,[9] are still on the island, but are overgrown by the jungle and inaccessible to park guests.

The park opened with over 90,000 visitors in 2005 but by 2015, visitor count went to 20,000 tourists a day. The investors knew that each time the park added a new dinosaur, attendance spiked so they decided to begin creating genetically altered dinosaurs that could wow the crowds. And thus the Indominus rex came to be. Once it was announced to the public, ticket sales and preorders skyrocketed,[8] however, the Indominus rex eventually escaped and caused chaos all over the park, resulting in the deaths of at least 18 people, including Masrani himself, and many more were gravely injured following the escape of the Dimorphodon and Pteranodon from the Jurassic World Aviary. Although the hybrid was killed in the end, the park suffered an enormous amount of damage and was shut down, leaving the abandoned island for the dinosaurs again.

6 kids participated in Camp Cretaceous, a Dinosaur camp on the oppositie side of Jurassic World. The camp began a few days before the incident. The incident, however, not only effected the people in Jurassic World, but the campers in Camp Cretaceous as well. The campers encountered the Indominous Rex a few times, were chased by the Indominous Rex twice, and also witnessed Mansrani's helicopter crashing. Unforutntely, the six were left stranded on the lsland, due to not arriving at the Ferry on time.[10]

The ecosystem of Isla Nublar post-Jurassic World was considerably more unstable than previously, largely due to the presence of a much greater number of large carnivores on the island.[12] This led to overhunting and competition, with a number of species falling back into extinction after the fall of Jurassic World.

The reactivation of Mount Sibo threatened to destroy or at least devastate Isla Nublar, thus endangering the surviving dinosaur population. With the eruption of the island in 2018, around half of the dinosaur species present on the island were rendered extinct with the remaining population transported to the mainland United States.[13]

Through a combination of cloning and transporting the dinosaur population of Sorna to Nublar, Jurassic World housed at least 51 species.[7] A number of dinosaurs on the island had gone extinct by 2018, with only a handful of species surviving the eruption of Mount Sibo.

Jurassic Park, Jurassic World, and Jurassic World: Fallen Kingdom all take place on an island 120 miles off the coast of Costa Rica. The movie was filmed on the islands of Hawaii.

Isla Nublar is home to a wide variety of fauna recreated by InGen. While dinosaurs are the most commonly seen fauna, mammals and reptiles, along with birds and amphibians also live around the island. The seas that surround the island serve as the prominent habitat for numerous water based fauna including fish, marine mammals, and even Jurassic World’s own Mosasaurus.

In regards to the carnivores, Tyrannosaurus dominates at the top of the food chain as the apex predator of the island, while predators such as Suchomimus, Baryonyx, Pteranodon, Carnotaurus, Compsognathus, and many others each occupy their own niches.

On the other hand, giant herbivores like sauropods have the advantage of feeding on trees, all the while leaving the grass and low growing vegetation to herbivores who restrict themselves to feeding at that level, thus displaying herbivore niche partitioning.

Flocks of pterosaurs can also be found flying throughout the skies.

After Jurassic World was shut down, the surviving animals continued to thrive.

Swimming in the ocean

Isla Nublar is now but a burned up raging inferno island.