Abandoned and restricted as of 1997

"Where you're going is the only place in the world where the geese chase you."
—Ian Malcolm(src)

After InGen bought Isla Sorna, they code-named the island "Site B". Isla Sorna became InGen's "factory floor", where dinosaurs were cloned in the various facilities InGen built on the island. The dinosaurs were nursed in temporary cages until they were fit to be transported to Jurassic Park on Isla Nublar, 87 miles east of Isla Sorna.

After Hurricane Clarissa hit the island, all personnel were evacuated from the island and the facilities were later abandoned. However, before they left, the InGen personnel unlocked the cages so that the dinosaurs could have a better chance of surviving the storm. Within a few years, the dinosaurs took over the island and established a fully functional ecosystem.

In the first stages of the development of The Lost World: Jurassic Park, the geography of the novel version of the island was used. Later, they made a new version of the island. The geography of this island is revealed during Hammond's scene in the film. John Hammond shows Ian Malcolm a screen on which the thermal signatures of the dinosaurs are seen, but the island as a whole is also seen. Based on this and other maps, the crew of Jurassic Park Legacy made a more detailed map that shows all locations.

The location of Isla Sorna is also revealed. At the start of The Lost World, it's shown that Isla Sorna is located 87 miles (140 kilometers) southwest of Isla Nublar. At the start of Jurassic Park III it says that it is located 207 miles (333 kilometers) west of Costa Rica. Before the expedition leaves, when Kelly Malcolm is inspecting the Fleetwood RV Mobile Lab, a map of the island which includes part of Costa Rica, as well as latitude and longitude markings, is shown. From this map, the location of the island is as follows:

Furthermore, when Nick Van Owen calls from the Worker Village, he gives the following coordinates:

The geography, like Isla Nublar, was originally igneous. Part of a hotspot archipelago in the Pacific, Las Cinco Muertes, Isla Sorna has a geographical plain of sharp volcanic cliffs, which over time, has been overlain with both classic and coniferous jungle. This volcanic history was actually tapped into by InGen, who used geothermal energy as a renewable power source to run the Worker Village. Incredibly mountainous, this geological construct has allowed for an interesting division between the predators and herbivores of the island. The larger and more fearsome carnivores such as the Tyrannosaurus and Velociraptor tend to stay mostly towards the island interior, while the herbivores such as Parasaurolophus and Mamenchisaurus stay on the rim of the island along with very small carnivores such as Compsognathus. Interestingly, the structure of this island allows for a very curious arrangement. The island has multiple channels and canyons that cut into its interior all the way from the coast. This allows for the statements said by John Hammond in 1997, and the often misinterpreted statement about the arrangement said by Eric Kirby in 2001 to both be true. Essentially, a large enough portion of the island interior also has a large number of water inlets cutting into it. Although the island is in a tropical region, at night, Isla Sorna has been shown to be cold enough for one to see their own breath.

The topographic map of Isla Sorna was first used in The Lost World, based on an earlier script, although it remained the same and was reused for the production of Jurassic Park 3. A similar topography is seen on Eddie's radar.

Several places on the island are named here, with their altitudes known to the ocean, from some beaches, mountains, and other geographical landmarks. One of the highest points shown on the map are "Punto Alto", a 1000 meters high peak, in the north of the island and separated from the rest by a ravine caused by one of the rivers. Another landmark would be the great accompanying mountains of "Lago Real", a range that is closer to the center of the island and connected to various water sources. Although referred to in the movies, sites such as the Main river of Site B or the Isla Sorna Lagoon are not named on the map, probably due to being casual names rather than true geographical identification.

Around Isla Sorna, several islets are seen, two of them known as "La Roca Grande", to the northwest, and "La Roca Muerta", to the southeast. Because of their large size, they can be seen on the map, unlike the rocks closest to the coast seen during Jurassic Park 3.

Some of the beaches on Isla Sorna may include:

Among the framed human roads and settlements, only the Worker Village is named. The other structures are unknown, since it has not been confirmed what their true identity is.

During InGen's operations on the Island, there were four areas that were constructed. The Embryonics Administration was the main factory that produced the dinosaurs on a massive scale. There was also an airstrip that was built close to the Embryonics Administration. After the production of a mutant variety of Pteranodon, a large Aviary was constructed where the genetic mutated Pterosaurs could be studied and quarantined. Following the river through which the aviary was connected, several cargoes and at least one boat could be seen to transport materials, to an area with an unused structure and a crane accompanied by a cliff.

The Worker Village was a small compound that was used as the barracks for the Employees who worked at Isla Sorna as well as possessing a radio that could reach the mainland. InGen continued their operations on Isla Sorna up until 1993, sometime after the Incident on Isla Nublar, when a hurricane struck Isla Sorna and forced the evacuation of the island.

After the evacuation of Isla Sorna, the dinosaurs were freed and left to take care of themselves. In 1997, a British family on a yacht cruise stumbles on the Island and the family's little girl is attacked by several Compsognathus. Peter Ludlow, John Hammond's nephew, uses the incident to take over InGen and become the new CEO of the company. Knowing that Ludlow is planning an expedition to Isla Sorna to capture the dinosaurs to be displayed at Jurassic Park: San Diego, Hammond sends his own team to Isla Sorna to document the dinosaurs in order to gain public support for the isolation of Isla Sorna as a natural preserve. As Ian Malcolm points out, the dinosaurs should have succumbed to the Lysine Contingency and died after about 6 or 7 days, but Hammond reveals that the animals are actually thriving on the island. He also explains that carnivores tend to group towards the middle of the island while herbivores stay mostly on the outer rim.

However, once on the island, the clashing of Ludlow's and Hammond's teams causes chaos to break loose. The survivors on both teams have to combine forces and hike to the Worker's Village in order to send a distress call. After a few days of hiking, the teams encounter a pair of parent Tyrannosaurus, and then a pack of Velociraptors outside a field of long grass. Their numbers now heavily diminished, the rescue call is made and the teams are airlifted out. However, Ludlow is able to salvage his operation by capturing a male T. rex. Unfortunately the Tyrannosaur Buck breaks loose and rampages through San Diego, the animal is eventually recaptured and returned to Isla Sorna, along with the Infant T. rex. After this incident, Isla Sorna is declared a restricted zone by both the US and Costa Rican governments while deliberation begins by both sides on what should be done with the island.

In 1998, a small team of scientists from InGen illegally landed on Isla Sorna against the 1997 Gene Guard Act and began the process of cloning new species of dinosaurs not created before and therefore were not on “InGen’s list”. They were grown and experimented on over a period of nine months covertly in order to avoid any carnivorous dinosaurs. The new species included Ankylosaurus, Ceratosaurus, Corythosaurus, and Spinosaurus; all of which were abandoned on the Island when the scientists left.[2]

Four years later, in 2001, a 12-year-old boy and his mother's boyfriend, Eric Kirby and Ben Hildebrand respectively, went parasailing near Isla Sorna in hopes to see dinosaurs. Unfortunately, something attacks their boat, leaving Ben and Eric stranded on the island. After pleading to multiple agencies for help in getting their son back, a divorced couple Paul and Amanda Kirby travel to the island with Alan Grant and a trio of mercenaries in order to retrieve Eric. After a Spinosaurus destroys their plane and takes out two of the mercenaries, the group is left stranded on the island. After finding Ben's rotted corpse, the group treks on but gets separated after a Velociraptor encounter. Eventually finding Eric and regrouping, the Kirbys and Alan Grant are able to send a call to Ellie Degler, whose husband works for the US State Department. She is then able to send the US Marines and Navy to the island and rescue the Kirbys and Alan Grant.

The Jurassic Park 3 region appeared to be much more tropical than The Lost World region, possibly due to mountains keeping moisture from reaching the other portion.

While dinosaurs are the most commonly seen fauna, mammals and reptiles (along with birds and amphibians) also live around the island. The seas that surround the island serve as the prominent habitat for numerous water based fauna including fish, marine mammals, and even sharks.

In regards to the carnivores, Tyrannosaurus dominates at the top of the food chain as the main apex predator of the island. However, after the illegal species created in 1998 were released on the island, the Spinosaurus began to compete with Tyrannosaurus for territory, while predators such as Velociraptors, Compsognathus, Dilophosaurus, and many others each occupy their own niches.

On the other hand, giant herbivores like sauropods have the advantage of feeding on trees, all the while leaving the grass and low growing vegetation to herbivores who restrict themselves to feeding at that level, thus displaying herbivore niche partitioning.

Flocks of pterosaurs can also be found flying throughout the skies.

Migrations are known to occur on Sorna from time to time, usually in dry seasons and droughts when food and water become less abundant for the herbivores. On other occasions such as breeding season, herds of herbivorous dinosaurs travel long distances to reach their traditional nesting grounds.

All of the dinosaurs on InGen's List were cloned on Isla Sorna. It should be noted that these dinosaurs were at some point planned to be shipped to the park on Isla Nublar, but this never occurred due to the 1993 incident. Dinosaurs that exist on the island include:[2]

There are records revealing that Herrerasaurus was created by InGen on Isla Nublar, but it's unknown if any remained on Isla Sorna or not. Geosternbergia is seen in The Lost World to be on Isla Sorna, but the exact numbers or even the species have not been revealed by the DPG. This also happens with Maiasaura and Hadrosaurus, which can be seen as part of the Roland's dinosaur guide.

After Masrani Global Corporation bought InGen, at least four illegal species were cloned and released onto the island, which were the Ankylosaurus, Ceratosaurus, Corythosaurus, and Spinosaurus.

The shore from the opening of The Lost World: Jurassic Park 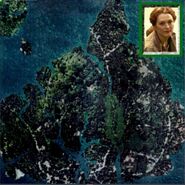 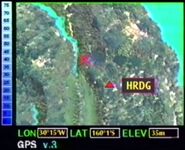 Retrieved from "https://jurassicpark.fandom.com/wiki/Isla_Sorna_(movie_canon)?oldid=248597"
Community content is available under CC-BY-SA unless otherwise noted.