The Isla Sorna Aviary was a facility made by InGen designed to raise Pteranodon for Jurassic Park until they reached a certain age.

It made his first and only appearance in Jurassic Park 3, after the protagonists will meet and enter this facility to protect themselves from a Spinosaurus attack, searching for an exit down the River. Was not mentioned in The Lost World and is unknown about the difference of its inhabitants seen in that film and those shown in Jurassic Park 3.

The Isla Sorna Aviary was placed in a canyon over a river, probably because it provided fish for its residents. The entrance, however, was on the top of the canyon, and it would take several flights of stairs to reach the bottom. Because of this placement, immense fog would be generated and engulf most of the aviary. A metal door kept the inhabitants from escaping and was kept locked at all times. Outside of this door, a barge was docked.

The Isla Sorna Aviary was connected to an observatory that could be used to enter it. The observatory was guarded by a large perimeter fence more advanced than the ones used in Jurassic Park. The building had three floors. The third floor was a watchtower, the second floor had two steel doors and the first floor had an area that had a stairway to the bridge that led to the aviary and an unknown location, all connected by a spiral staircase. Furthermore, at the end of the bridge that led to the bird cage were stairs to an elevated platform which in turn led to a walkway.

According to visual effects supervisor Jim Mitchell, the full-scale in-universe cliff wall of the aviary is 350 feet high and spans 3,000 feet.[1]

InGen created the Isla Sorna Aviary sometime during the mid-late 1980s or early 1990s to raise Pteranodon and possibly other pterosaurs, for their new dinosaur park Jurassic Park. When the inhabitants reached a certain age, they would be transported to Isla Nublar to live in InGen's dinosaur park, though pterosaurs such as Pteranodon weren't planned to be seen by the public eye until Phase 2 of Jurassic Park occurred in the future.[2]

However, things turned sour when the Jurassic park Incident cancelled Jurassic Park[3] and when Hurricane Clarissa struck Isla Sorna, causing the workers on the island to abandon the animals they cared for.[4] Unlike most of the prehistoric fauna on the island, the InGen workers did not free any of the Pteranodons; instead they kept them trapped in their enclosure[5], presumably because the river running through the Aviary would provide a constant stream of fish for the Pteranodons, so they did not need to be freed. Though judging by the existence of wild Pteranodons on the island, there may have been some that were either freed, escaped the enclosure or just might have come from a different facility all together.[4]

Many parts of the aviary including the walkway and the fence that protected the observatory were damaged at an unknown date from either lack of care and old age or from Hurricane Clarissa.

By 2001, there were four adult Pteranodon and a nest of six juveniles.[5]

Dr. Alan Grant located the aviary's barge while he was with Eric Kirby.

Soon afterward, Dr. Alan Grant and Eric Kirby met up with Amanda and Paul Kirby and Billy Brennan on the opposite sides of the Isla Sorna Aviary's large lookout fence. While they were expressing their joy of being reunited, the vicious Spinosaurus attacked Dr. Grant and Eric. The two evaded the Spinosaurus by crawling through a puncture in the fence; but when the Spinosaurus seemed to have given up on the humans, it charged through the fencing and got to the other side.

The group immediately rushed to get inside the building behind them. Paul and Dr. Grant locked the steel doors of the observatory, which halted the Spinosaur's pursuit of them and it soon returned to the jungle. While inside, Grant discovered why a Velociraptors had followed his group. Billy Brennan had stolen their eggs that they had come across earlier. Afterward, the group continued their escape from the island and descended the spiral staircase but when Dr. Grant tried to go down the stairs to the unknown area, they suddenly collapsed on him from a mixture of factors, causing him and the other survivors to take the nearby bridge.

Dr. Grant was the first to cross with Amanda Kirby being the second. But as the thick fog faded, Dr. Grant discovered that they were in a birdcage. As soon as he made this discovery, a Pteranodon snatched Eric Kirby so it could feed him to its young. Billy bravely went to save Eric by paragliding after him with the rest of the humans running desperately through the walkway trying to reach the boy as well. However, they reached a part of the walkway that was missing so they were unable to reach the rest of it. While they were stuck a Pteranodon attacked them, but when the flying reptile got inside the corridor it collapsed from the giant pterosaur's weight, which most likely killed it.

Eventually, the humans, minus Billy who had sacrificed himself to save his fellow survivors, escaped once they reached the barge, but the steel door that Amanda Kirby and her son Eric used to get out of the Isla Sorna Aviary opened itself shortly after she had failed to lock it. This allowed three adult Pteranodons to depart the enclosure they spent most of their lives in.

The Pterosaurs flew to Canada, where Vic Hoskins and the InGen Security Division were sent in to handle the "clean up". The pterosaur juveniles that were left behind for some reason died from starvation or some other means.

Alan and the group being threatened by a Pteranodon in the walkways.

A Pteranodon splashing in the water of the aviary.

A Pteranodon attacking the group on the walkway. 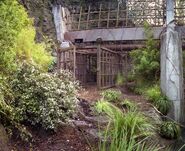 In the Jurassic Park III arcade game, the InGen rangers enter the Isla Sorna Aviary (called simply "Bird Cage" in the game) during their quest to rescue the survivors of a plane crash on Isla Sorna. Unlike in the Movie canon, Pteranodon and pterosaurs are not the only inhabitants of the aviary as the territorial Velociraptor is encountered as well. The rangers ultimately kill many of the Pteranodons residing there and leave the enclosure via the barge stationed there.

Its only appearance in the game's story is in the level "The Bird Cage" and its prelude. Before first initiating the level, the player(s) must open the doors to the aviary. In the level itself, the survivors are scared into the aviary by the Spinosaurus and they later go down the observatory's staircase after Dr. Grant discovers that Billy is in possession of raptor eggs. As they walk on its bridge, Alan discovers that it is a birdcage and a Pteranodon snatches Eric.

Throughout the first half of the level, the player(s) must go through the aviary's walkway to reach Eric Kirby. At the end of the walkway, Billy decides to parasail to Eric and rescues him from the hungry Pterosaur juveniles. He then drops Eric on top of the back of a Pteranodon cornering the other survivors, causing the section of the aviary that the humans were inside to tilt downward and the humans to fall into the water below, which allowed them to reach the nearby boat that Alan Grant had found in the previous level "Eric Kirby".

On the Isla Sorna Hub, Charlie Degler can be found just outside and a variation of his mother Ellie Sattler called "Ellie Degler" found inside the Observatory are both available for purchase. The player(s) can go down the Observatory's stairway where they can enter the aviary itself, which is on of the two areas in the game where pterosaurs can be spawned, the other being the Jurassic World Aviary. This is also the only area in which the juvenile Pteranodon is playable and it is used to acquire a red brick.

An aviary in the style of the Isla Sorna Aviary can be placed in the game via the Return to Jurassic Park DLC. It is used as a pen for the Pteranodon.