San Diego Incident
The Isla Sorna Incident was a major incident that happened on Isla Sorna.

Before the incident, a wealthy British family Paul Bowman, Deirdre Bowman, Cathy Bowman, and their crew, were on a yacht cruise when they unknowingly landed on Isla Sorna for a picnic. Their daughter wandered off and was attacked by a pack of Compsognathus. Her parents and the crew heard her screams and ran to save her. Fortunately she survive, but her parents sued InGen. Peter Ludlow then used the lawsuit to remove John Hammond from the position of CEO to build a new Jurassic Park in San Diego.

The incident began with Hammond's team arriving at Site B, on the Mar Del Plata, to A look at and photograph dinosaurs, and B "rescue" Sarah Harding. However, after arriving and finding Sarah, the group discovers that Kelly, Ian's daughter, has stowed away on board the RV, infuriating Ian. Moments later, the group sees and hears several choppers with InGen on the sides dropping off many vehicles with people on them. They discover these are the "InGen Hunters", their mission being to capture several herbivores for the planned San Diego park.[1]

After the hunters capture many dinosaurs, Nick and Sarah free them and sabotage the hunters vehicles, causing chaos and destroying the hunters' equipment. However, Nick discovers the injured infant Tyrannosaurus and takes it to the RV for help. Ian, concerned for Kelly, takes her and Eddie to the High Hide to hide. Moments later, Ian discovers that the mother and father are coming to look for their child. Ian rushes to the RV, but moments later the Tyrannosaurs arrive. After a brief scuttle, the parent Tyrannosaurs leave, and Eddie comes to attempt a rescue. But just as he is pulling the RV back up, the predators return and devour him.

Minutes after they leave, the hunters, following the sounds, come by and rescue the survivors and Kelly, who was left in the High Hide. Roland was furious at the team for destroying everything but accepted them into his group seeing as they could help. Ludlow soon sees that the only way they can get off the island is to get to the Worker Village, but he knows that Raptors are around and could cause trouble. Nevertheless, the group gathers supplies and sets off.

Later, Dieter Stark gets lost and after being attacked by Compies, gets killed and eaten by them. Roland, Ludlow, Malcolm, and another hunter go looking for him, and discover his remains as "the parts they didn't like". Around ten-fifteen minutes later, the Rexes come to the campsite, curious, because Sarah had the blood of their infant on her shirt. Panicked, Carter alerts everyone of their presence and everyone runs away scared. Some ran into a waterfall, but the mother Tyrannosaurus comes and eats Robert Burke. The others ran into the "long grass" in front of the Worker Village, where awoken Raptors came out and ate most if not all of the hunters.

Seconds later, Hammond's team follows the hunters and arrive outside the village. Nick goes on his own to try and reboot the systems and call for help, while the others stay behind. Later they go out to look for Nick, unaware that raptors were close by. When they get into the parking lot, the raptors jump out and separate the group.

Concurrently, Roland finds the male Tyrannosaur eating Carter's dead corpse and he shoots it with a Carfentanil tranquilizer, sedating it. He then meets up with Ludlow and other surviving hunters to wait for help.

However, the raptors broke through a generator room where Hammond's group was hiding. Luckily, Kelly, using her gymnastic skills, was able to knock a raptor off its feet, causing it to fall and be impaled by a spike below, killing it. But soon, the other two raptors chase after Sarah, who manages to knock one off the roof, hitting the other. While the two raptors try to kill each other, they all hear what sounds like helicopters, and the people are rescued from the island. As they fly over the island, they discovered InGen has captured the male T. rex to bring him and his infant to the mainland, thus causing the San Diego Incident. 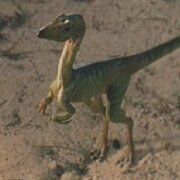 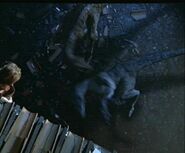