Jurassic World Incident
The Isla Sorna Rescue Mission was a major event that happened when a small plane crashed on the Isla Sorna, also known as Site B.

Nearly eight weeks before the incident, Ben Hildebrand and Eric Kirby got on a parasailing trip with the illegal company Dino-Soar, run by Enrique Cardoso and his driver. While touring around the area, the boat's crew mysteriously vanishes with nothing but a pool of blood left and a busted boat. They cut loose and drift onto the island.

8 weeks later, after Dr. Alan Grant fails to get more money for his dig site, Paul Kirby comes to the site, asking Alan out for dinner for some arrangements. Mr. Kirby, as well as his "wife" Amanda Kirby meet Alan along with Billy Brennan at the Hell Creek Bar & Grill. Paul says he will give Alan any amount of money if he becomes their guide for a tour over Isla Sorna, to which Alan reluctantly agrees.

Soon after, the four along with two pilots and another man, set off. While touring, Alan becomes suspicious, and before he can act, one of the men, Cooper, knocks him out.

When he wakes up, Billy tells him that the group landed, and it sounds like they're looking for somebody, at the Isla Sorna Airport. Thanks to Amanda using a loudhailer, they hear a loud roar, but it sounds much larger than a T. rex. Udesky and M.B. Nash, the two pilots, soon come running out of the forest and tell them to get on the plane, leaving Cooper behind to fend for himself. However, as the plane begins to take off, they see Cooper at the front of the runway begging them to stop. Suddenly, a large theropod bursts through the trees and seizes Cooper, killing him and then devouring him off-screen.

The plane hits the dinosaur and crashes into the forest. It then tears off the entire nose of the plane. It then sticks its snout into the wrecked plane, looking for more prey. It grabs Nash and pulls him out by his legs. It then drops him, steps on his back, and eats him. The five people left flee the wreckage, only to find a Tyrannosaurus eating a killed Parasaurolophus. The T. rex sees the surviving group, and roars, then it begins to chase them. The group run for their lives with a hungry T. rex on their heels, and they come across the theropod. The T. rex roars at the other theropod, who roars back. The two dinosaurs engaged in a fierce battle. Eventually the mystery theropod gains the upper hand. It grabs the T. rex by the neck with its mouth and hands, and twists, breaking the Rex's neck. The T. rex falls to the ground. As the group runs off, the theropod roars in victory, and then prepares to eat its kill.

The group heads back to the wreckage to look for supplies, where Alan also identifies the mystery theropod as a Spinosaurus. Billy points out that it wasn't on InGen's List. Dr. Grant confirmed that it was not on the list and that this made wonder what else InGen is up to. Then, they learn that Paul and Amanda lied to them about being millionaires and really came to the island to look for their son, Eric Kirby. Alan is infuriated. The group heads out, but discovers the remains of a parachute lying on a tree. After Udesky finds a camcorder, they conclude this was the parachute that Eric and Ben rode in. This is further confirmed when they find Ben's deceased corpse inside the chute.

The group soon inadvertently find a group of Velociraptor nests. After Billy regroups after "photographing" the nest, they find the InGen Compound and try to find Eric and see if there were any ways of communication. After failing, they look around to see if anything of interest was there. And something found them: a male Velociraptor jumping out at them. After eluding the raptor, it calls its pack-mates who come out and stalk the group. They seriously injure Udesky and attempt to use him as a trap to catch Amanda, Paul, and Billy. After this fails, the alpha raptor grabs Udesky by the head, and twists, breaking his neck and killing him as a horrified Billy, Paul, and Amanda watch.

Alan gets split off from the rest and is confronted by the raptors, but is rescued by Eric and take shelter in a truck. The two bond over a love of dinosaurs and a disdain for Ian Malcolm. When they leave, Eric hears his dad's satellite phone and runs towards it, while Paul hears Eric's voice and runs towards it. They meet up at a large perimeter fence, but both soon discover where the phone sound is really coming from: Nash's dead body inside the Spinosaurus.

After nearly dying, the group takes refuge in a building. Alan then makes the alarming discovery of Billy having raptor eggs. Concluding they should keep the eggs and then give them back to the raptors later, they keep trekking, onto a bridge going down towards a barge. After two people cross the bridge, Alan discovers that it's not just a bridge; it's a bridge of the Isla Sorna Aviary where Pteranodons live. Billy sacrifices himself to save Eric and the rest of the group escape.

After one final run-in with the Spinosaurus sinking their barge, the group heads towards the ocean, only to be stopped by the raptors. They give the raptors the eggs back and use a Velociraptor Resonation Chamber Prototype, and the raptors flee from a whizzing sound. The sound is from helicopters of the U.S. Navy and U.S. Marines, sent by Ellie Sattler to rescue them. Armored amphibious vehicles then arrived on the beach and deployed Marines. The group boards a Seahawk and discovers a critically-wounded Billy inside. They then fly towards a aircraft carrier as the Pteranodons fly by as well.

The Pteranodons made their way to Canada, where Vic Hoskins and the InGen Security Division were sent in to handle the "clean up".[1]

According to the DPG, the information about the four illegal dinosaur species not on InGen's list, Ankylosaurus, Ceratosaurus, Corythosaurus, and Spinosaurus, in the rescue mission was quickly buried by "bribed officials".[2] 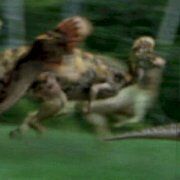