Dr.[5] John Alfred[6] Hammond, or John Parker Hammond (Trespasser canon), was the CEO and creator of Jurassic Park. He founded the company InGen and the Hammond Foundation. He had at least one daughter, two grandchildren (Tim and Lex Murphy), a sister (as Hammond's nephew has the surname of Ludlow, not Hammond) and a nephew, Peter Ludlow.

In the novel Jurassic Park by Michael Crichton, John Alfred Hammond was the arrogant, flamboyant and idealistic dreamer that discovered the fantastical way to clone extinct animals from blood-sucking insects. He was also the CEO of International Genetic Technologies, Inc. and creator of Jurassic Park.

He had little interest in the technicalities of genetic engineering, but great interest in making a profit and progress. His darker side is shown more often, as he is frequently upset with his employees and seems to care more about the safety of his expensive animals. Hammond has drastic mood swings and quickly turns from angered to sympathetic. He was entirely confident that the people of the world would be satisfied with his park in Costa Rica, oblivious to the problems, and that his parks in Europe and Japan would be successful in the following five years, earning an annual revenue of over twenty-billion dollars a year, more income than any other zoo or theme park in the world. Despite Muldoon telling him there was no way to bring down the Tyrannosaurus rex, Hammond insisted his employee should.

Later in the novel, Hammond is killed by a pack of Procompsognathus after falling down a hill and breaking his ankle, running from what he thought was the juvenile T. rex, but was really a recorded tyrannosaur roar over the park's P.A. system. Hammond was still adamant 'til the end that he could create a successful dinosaur theme park and suffered justice at the hands of his creations. Hammond died at 76 years old in the novel, nearing 77 in the coming months. This meant he was born around 1913.

"Hammond was a hustler, and his true talent was raising money"
—Ian Malcolm(src)

In the second novel, The Lost World, Ian Malcolm briefly reveals the true secrets behind the InGen Incident, reviewing Hammond's investment strategies and rise to monetary power. He describes why the park failed and why Site B was guaranteed to be there. According to Ed James, Hammond merely died on a business trip to InGen's Island in Costa Rica.

In the film, John Alfred[7] Hammond is a flamboyant venture capitalist from Scotland, building his fortune in Petticoat Lane, England. He also held parks in Kenya, Costa Rica, and other tropical locations.

The only similarities of the film's Hammond to the novel's Hammond are eccentricity and value for money but he is not as much of a dark character. While the novel's Hammond is cold, ruthless and in many ways the stereotypical businessman (i.e., uncaring about people, Machiavellian in his attempts to control his creation), the film's Hammond is affable and kind and is genuinely concerned about the well-being of his grandchildren and the other visitors as well as his employees at the park. He also cares about his dinosaurs at the same time, but understands the circumstances when the park fails. The novel's Hammond's personalities are seen instead in Donald Gennaro.

The turning point for film's Hammond is when Ellie Sattler bluntly tells him that he "never had control" and that the only thing that matters now is the survival of the people they love. Hammond is visibly struck by Ellie's words and spends the remainder of the film doing whatever he can to make sure that they all survive Jurassic Park. Unlike his novel appearance, John escapes Jurassic Park and agrees with Dr. Grant that the park was a failure and should not be endorsed, though he was understandably depressed about the failure. 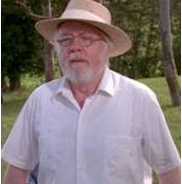 His mosquito in Amber Cane

Hammond does not physically appear in Jurassic Park: The Game, although his helicopter is briefly seen at the end of Episode 1. In the InGen Field Journal, it is revealed that he had replaced Dr. Laura Sorkin as InGen's lead geneticist with Henry Wu, as Wu's method of combining frog DNA sped up the cloning process.

"You were right and I was wrong there, did you ever expect to hear me say such a thing?"
—John Hammond to Ian Malcolm(src)

Four years after the Isla Nublar Incident, an ailing John resides in a mansion. He was fired as CEO of InGen and replaced by his nephew, Peter Ludlow. He had become a naturalist rather than continue being an industrialist. He was seen talking with Ian Malcolm about sending a team to Isla Sorna to document the animals. Ian becomes angry when John revealed that he had allowed his girlfriend Sarah Harding to go to Isla Sorna, but reluctantly goes. He is briefly seen in the San Diego Incident CNN broadcast saying that the dinosaurs should be left alone on Isla Sorna and ends with Ian's quote, "life will find a way."

"Now what John Hammond and InGen did at Jurassic Park, is create genetically-engineered, theme-park monsters, nothing more, and nothing less."
—Alan Grant(src)

Hammond is only mentioned by Dr. Grant in a conference, with the former declaring he still did not agree with John's original intentions.

Two decades after the original disaster, John Hammond's dream has finally come true in the form of a new fully-functional dinosaur park. The cloning facility on the island is named after Hammond: Hammond Creation Lab. Ever looking towards the future, his statue stands in the Innovation Center, before the entrance to the Hammond Creation Lab, in remembrance of his heart, passion and imagination.[9]

Three years later in Jurassic World: Fallen Kingdom, a portrait of Hammond was seen in the Lockwood Manor.

As CEO of InGen and the head of Jurassic Park, Hammond tours Donald Gennaro around Isla Nublar during the construction of Isla Nublar in an attempt to sway him into his (Hammond’s) favor. Gennaro seems unimpressed by everything he witnesses, despite witnessing the birth of the Park’s first dinosaur, a young Tyrannosaurus. Around this time, he hires Dennis Nedry as one of the Park’s technicians.

In 1993, he invites Drs. Alan Grant and Ellie Sattler to Isla Nublar to receive the opinion of dinosaur experts on his island; in turn, he funds their palaeontological dig for three years. He leads the guests on a tour through the Visitor’s Center, but becomes trapped there when the systems are messed with by Nedry to buy him time to partake in industrial espionage, and in the aftermath as John “Ray” Arnold attempts to reboot the systems. Eventually, he escapes from the island, and appears to be furious at BioSyn (a rival company of InGen); having figured out that it was they who had hired Nedry to sabotage the systems of Jurassic Park and attempt to steal embryos.

In turn, Hammond orders some of his men to plant a bomb in a major BioSyn facility, and soon receives a phone call from an enraged Steingarten (head of BioSyn), although he casually shrugs off his opponents accusations. At the same time, he sends a group of helicopters out to the South American rainforest to find the missing Grant, Sattler, Ian Malcolm and Robert Muldoon.

Shortly afterwards, with reports of a wounded soldier likely having been washed up from Isla Nublar, Hammond hires Grant, Sattler, Muldoon and Edgar Prather to search the island and find out what the army are doing there and what the “Green Flame” mentioned by the injured man was.

-John Hammond in the opening to Trespasser

In the canon of the 1998 Trespasser video game, John Hammond is stated to have been born on March 14th, 1928. He left home at 15, and went from Scotland down to London. He quickly built a reputation for being a mysterious and shady investor, multi-millionaire, and jovial mad-scientist. In 1979, John Hammond and Norman Atherton, a stanford geneticist, founded International Genetic Technologies Inc. (InGen) with funding provided by Hamaguri and Densaka, two Japanese investment firms. He observed offshore islands in the Caribbean and Costa Rica in 1980, choosing Isla Sorna for his secret project. In 1982, he assigned Robert Muldoon to work at Jurassic Park, and he hired two employees; Dennis Nedry, and Henry Wu, the protege of the late Norman Atherton. In 1982, one day at 3AM, the very first strand of dinosaur DNA first appeared on Dennis Nedry's computer screen. In 1985, the first-ever InGen dinosaurs, including the very first Velociraptors, were bred. After the Isla Nublar Incident, which occurred on August 27, 1989, John Hammond put his park under a de-construction phase. Hammond went Bankrupt, and InGen began began to strip buildings on Site B for anything valuable. His nephew, Peter Ludlow, took control of InGen in October, 1996 when Hammond was 68 years old. Everything about Hammond's past was told in his novel, Jurassic Time, which he wrote shortly after the San Diego Incident, to tell the public about the true story about InGen's rise to power, and the shattering of his dream.

Hammond is featured in Jurassic Park: Operation Genesis as your employer, and the CEO of your park. He gives you a star rating of your park if anything changes, and gives you the board of InGen. Hammond will only send you mail after you have opened your park.

In the Islands of Adventure, in Orlando, multiple Jurassic Park attractions are built. The premise of this park is, that this is the Park that John Hammond has built when he was offered a second chance by Universal Studios. John Hammond guides viewers through the park in a promotion video, with Richard Attenborough reprising his role.

Jurassic Park Wiki has a collection of images and media related to John Hammond.

Retrieved from "https://jurassicpark.fandom.com/wiki/John_Hammond?oldid=229132"
Community content is available under CC-BY-SA unless otherwise noted.