Nima, Gerry and Jess all head inside the jungle, with Nima still holding them at gunpoint. They decide to stop and rest, where Gerry starts a fire (ultimately creating a signal secretly). Nima places the radio she carries with her on the log she is sitting on. There seems to be no way of getting the radio off her without a distraction, so Gerry talks to Nima, and starts a conversation with Nima, which indicates Nima may have a daughter. As Nima threatens Gerry about the matter, Jess manages to grab the radio. She tells Nima that she needs to go to the toilet, and runs behind a tree to call for help. She manages to contact Yoder, who tells them that they created a fire that they may be able to spot. Unfortunately, Nima finds out what Jess has done, and grabs the radio off of her. Nima tells Gerry and Jess to keep moving to the coast. 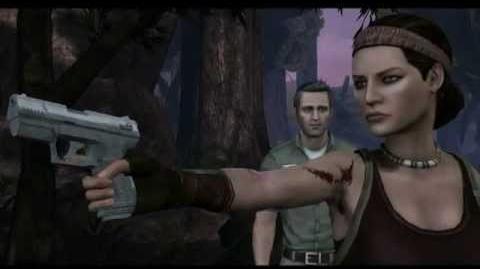