"Infant’s probably only a few weeks old. Never left the nest. Offspring that young, parents won’t leave it for too long."
—Roland Tembo(src)

Junior is the youngest of the three Tyrannosaurs featured in the film The Lost World: Jurassic Park. Junior gets his name from his toy in Kenner's The Lost World Series 1 who has the codename of "Junior". Junior is classified as a Tyrannosaur Fawn since the adult male is a Buck and the adult female is a Doe.

The infant T. rex (Tyrannosaur Fawn) was born on Isla Sorna to two individuals who were Tyrannosaurus rex clones that had went wild after Hurricane Clarissa struck the island.[1]

He,[2] like all cloned Tyrannosaurus juveniles, spent his early life in a nest with his parents providing him food in his nest.[1]

When he was only a few weeks old, InGen, who brought his and his parents' species back to life, sent a team of hunters to capture Isla Sorna's wild dinosaurs for newly appointed CEO Peter Ludlow's Jurassic Park: San Diego. The hunters' leader, Roland Tembo, was interested in hunting the juvenile's father. When he found the nest the young Tyrannosaurus was living in, he and fellow InGen Hunter Ajay Sidhu captured the juvenile with the intentions of using him as bait to lure his parents to their camp.

While being used as bait, Peter Ludlow, who wandered away from the hunters' camp in a drunken stupor, accidentally broke its leg.[3] Then during the fiasco at the camp, caused by gatherers Nick Van Owen and Sarah Harding releasing the captured dinosaurs, Nick found the injured baby and took him back to the Fleetwood RV Mobile Lab, where Sarah applied first aid to his broken leg. Knowing that his cry can be heard and answered, Kelly begged her father, Ian Malcolm, to take her to the High Hide for safety. Eventually, the baby's cry is answered by his mother and father, and Nick, Sarah, and Ian were able to finish fixing his broken leg and he was soon released him back into the wild with its parents. However, despite having their son returned to them, both parents pushed the mobile lab off the cliff it was on deciding that it was a threat.

The infant was then later recaptured by the Hunters at the conclusion of the Isla Sorna Incident of 1997, and was shipped to the new Jurassic Park in San Diego, California via Peter Ludlow's jet. Ian and Sarah later arrived at the facility to find and retrieve him during his father's rampage. They used the infant to lure the Tyrannosaur Buck once again to stop the angry father from causing more damage to San Deigo and to take them both back to their home on Isla Sorna. The plan works, and in the Buck's attempt to retrieve his son, Ludlow gets wounded by the adult when he bites him in the legs presumably breaking them. The Infant Tyrannosaur's father decided to let him finish off Peter so he could teach him how to hunt on his own for later life. After killing Peter Ludlow, Sarah then tranquilized the adult male in the nick of time before the order to kill it can be done.

The two Tyrannosaurs were later transported back to Isla Sorna after the San Diego Incident and became reunited with the female. The last sighting of the infant was of him and his family on a plain next to the Stegosaurus herd and a flock of Pteranodon.[1] 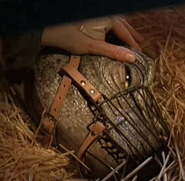 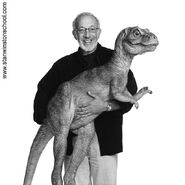 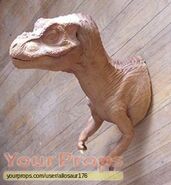 The baby T. rex appears in Chaos Island: The Lost World. In some missions, the player's objective is to bring it back to its parents or to find it.

The baby T. rex appears in the fourth and fifth stages of as a NPC The Lost World: Jurassic Park arcade game

The Infant T. rex was in LEGO Jurassic World and did many of the same things as he did in The Lost World: Jurassic Park. Like all the other dinosaurs, Junior sometimes participates in humorous antics, due to the game's comical nature. Unlike Junior in the movie, all T. rexes in the game are brown like the female Tyrannosaurs, such as Rexy and the Female Tyrannosaur.

Being saved by parents

The baby T. rex appears in The Lost World Series 1. It is codenamed "Junior". Like in the film, it has a leg wound. Unlike the film the toy line is based on, he has brown skin.

This same baby T. rex appears as part of the exclusive Legacy Collection for the Jurassic World: Fallen Kingdom toy line. Here, it is light green with dark green spots along its back and on its legs, and features a chomping action by pressing down on its tail. It also comes with only one accessory, a muzzle for its jaws. 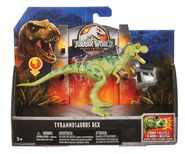 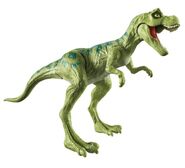 The young T. rex with its muzzle on

In the Jurassic Park: Redemption comic series, Peter Ludlow survived the attacks from the juvenile and his father, albeit disfigured and crippled.

Originally, Junior was supposed to be brown as seen on one of his maquettes and in concept art, meaning that he might have originally been planned to be female instead of male.[4] Furthermore, he is brown skinned in The Lost World Series 1 toy line, the arcade game, and in the video game LEGO Jurassic World.

It is fan speculation that the adult male Tyrannosaurus rex that was killed by the Spinosaurus in Jurassic Park III is Junior himself. However, this is mere speculation, as Junior has a different skin color. When asked if Junior was the Tyrannosaur killed by the Spinosaurus during Stan Winston School's "Jurassic Party" Matt Winston jokingly said: "Yes! We’re just making stuff up."[5][6]

Due to some specimens recently found of juvenile T. rex, it is possible that baby T. rex actually had longer skulls, therefore making the infant unrealistic. However, it is possible, though considered unlikely by most paleontologists, that the specimens in question represent a different genus, known as Nanotyrannus. New studies show that the arms of Nanotyrannus are a half longer than T. rex's arms, while a young T-rex's arm are similar to the adults but only smaller. However, it has also been proposed that the sparse "Nanotyrannus" specimens are life stages of Tyrannosaurus and the small differences can be chalked up to individual variation. More evidences show that the brain case of Nanotyrannus is dipped down substantially while T-rex's brain is parallel close to the ground.

In the film it was mentioned the juvenile was a couple of weeks old; it would have been too long for it to be that old, although it is implied that InGen accelerated the growth of their dinosaurs, which could account for this issue.

The dependence of young Tyrannosaurus on their parents is very apparent with this baby dinosaur. When it is injured and taken away from its parents, it barely ever stops howling for them, indicating that it is not yet capable of surviving on its own and requires its parents to come to its rescue.