CD-ROM
Jurassic Park: Dinosaur Battles is a PC game released in 2002 in which the player takes on the role of a government agent sent to Isla Sorna to rescue a junior explorer group who arrived on the island mistakenly thinking it was the Cabo Blanco nature reserve.

Rather than controlling a human, a cut scene shows the player in first-person view arrive in a lab and find a DinoVoc (a hand held computer screen that allows the user to send computerized calls to specially cloned dinosaurs) and the player takes control of dinosaurs in game. As they progress in the game, the dinosaurs are forced to battle different species of dinosaurs in order to search for the survivors.

Harrison Manly has planned the trip of a lifetime. He's leading five talented kids, winners of the Harrison Manly Junior Explorers Expedition Team essay contest, to Cabo Blanco Nature Reserve. Located just off the coast of Costa Rica, Cabo Blanco offers a hands-on chance to experience a tropical jungle and to discover new plants and animals. Of course, Harrison is far too experienced to consult a map… When the group accidentally lands on InGen's infamous Site B, it doesn't take long to realize that the island is crawling with dinosaurs and that InGen may be up to something even more sinister than cloning dinosaurs...

As a newly recruited agent, the call goes out to you. Before you know it you're hang gliding into Isla Sorna, armed only with your wits. On the island you find tools to power up and control dinosaurs. You're on your way!

As the player lands on Isla Sorna, an InGen lab is entered. Here the player find notes from Dr. Irene Corts, an InGen scientist who has found a way to clone, genetically engineer, and control dinosaurs. She provides her dinosaurs with specific skills and then sends them commands over a device she calls the DinoVoc. The player also finds one of her experimental dinosaur eggs. The Velociraptor that grows from it has only bite, rest and dodge skills, but it's a start.

In the Lab, the player is able to see the dinosaur they are currently working with—here a Velociraptor—and the skills the dinosaur has—in this case a Bite skill. The lab contains all the tools needed to build up your dinosaur's skills with DNA. 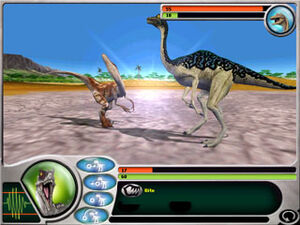 Posture buttons generally tell the playable dinosaur how close or far to stay from its opponent. There are four postures:

Use this posture to keep the dinosaur close to their opponent. For most attacks, they will need to be close by to hit the other dinosaur. But be careful, the offensive posture can use a lot of stamina since the dinosaur will chase after a fleeing opponent.

The Neutral command makes the dinosaur stay a few steps away from its opponent. The dinosaur doesn't usually run in the Neutral posture, so it won't use much stamina. Neutral is useful for sizing up an opponent.

The Flanking command tells the dinosaur to try to attack an opponent from the side, instead of head on. This is very useful when a fast dinosaur is fighting a slow, armored one, such as a Triceratops.

Each posture has skills that the dinosaur can use in battle. To command the dinosaur to use a skill, the player can click on the skill button.

The DinoVoc will send out a computerized call and the dinosaur will launch the attack if she is able to. Every skill takes up stamina, except Rest. If the dinosaur does not have enough stamina, she will not be able to carry out the skill. The DinoVoc keeps track of the dinosaur's health and stamina.

It is also possible to flee from battles.

The Dodge skill increases the chance that the opponent's attack will miss. The Dodge skill should be used when the dinosaur is low on health against a tough opponent, but has more stamina than its opponent.

Certain skills have the ability to stun a dinosaur if they connect. If one dinosaur stuns another with one of these skills, it will be unable to respond for a few seconds after the attack. Stun skills will give the dinosaur a short amount of time to rest, or to flee from its opponent.

Piercing skills are the only attacks that can damage Ankylosaurus. In addition, they have the unique property that the damage they inflict is not affected by normal armor (except for Ankylosaurus. This makes piercing skills very useful against heavily armored dinosaurs, such as Triceratops and Tyrannosaurus, as well as Ankylosaurus. Piercing skills like Piercing Chomp (for T. rex) or Piercing Lash (for Stegosaurus) can be obtained by defeating particular dinosaur.

All of the dinosaurs encountered have some kind of armor. For the most part, armor subtracts from the damage a skill does.

The Ankylosaurus has a special kind of armor called Spiked Armor. This armor not only protects the dinosaur really well, but it can also cause damage to a dinosaur that tries to attack. The only way to beat an Ankylosaurus is to find and activate a piercing attack skill.