You take the role of a fossil-hunting paleontologist as they explore Isla Sorna. Watch out though, dinosaurs run wild on that lost island. You will encounter dinosaurs ranging from the playful vegetarian Stegosaurus to the deadly Velociraptor and the fierce Spinosaurus.

In the game you will be given the choice of how difficult you play.

Be the first to collect the correct number of dinosaurs.

Jurassic Park Explorer can be played with 2 to 4 players or teams.

When a player or team successfully recovers the number of dinosaurs determined when the game was started, they win. 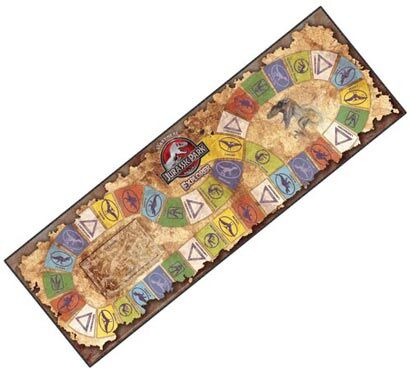 Jurassic Park Explorer is seven mini-games in one. As you trek across the seven different types of terrain on the board, you’ll face a different challenge with every move.

In this activity you can help locate dinosaur bones.

The scientists of Jurassic Park need more dinosaur eggs to study. Can you recover an egg sample and get it back to the lab?

Keep your eyes on the screen, even the smallest details count.

In the Screening Room you can watch dozens of clips taken directly from all 3 Jurassic Park movies.

So you think you know one or two things about dinosaurs? If you can answer these questions you bring back another dinosaur species.

Plains: Through the fog

You're about to see a dinosaur approaching through, which of these dinosaurs is it?

Get ready to match a dinosaur.

In the Laboratory, you’ll need to unscramble Dino-DNA. To re-create a species in the Dinosaur Scramble game.

Creatures that can be recovered in the mini-games:

Requires a television set and DVD player — not included.

The game has been criticized for having too many inaccuracies on the dinosaurs, most notably, the Allosaurus resembling a T. rex.