Jurassic Park: Trespasser (also known as Trespasser) is a game, which was released in 1998 for Microsoft Windows after much hype and anticipation. Hyped as the digital sequel to The Lost World: Jurassic Park, the player assumes the role of Anne, the sole survivor of a plane crash on InGen's "Site B" one year after the events of The Lost World: Jurassic Park. With a fractured arm and only her wits, Anne must escape the remote island by evading hordes of hungry and vicious dinosaurs, or face the gruesome alternative. This was one of the least-successful Jurassic Park games ever released.

Trespasser is similar to a survival horror game. The gameplay of Trespasser was meant to be as realistic as possible. Therefore, the game was first person and menus were absent. The player sees the world through the eyes of Anne. One of the most touted 'revolutionary and realistic' features of Trespasser requires that the player interact with the world through Anne's own arm. The Arm was one reason why so many reviewers gave Trespasser bad scores: they stated that the Arm was too difficult to control.

The game opens with John Hammond reading an excerpt from his memoirs. Hammond is a rich industrialist who used his wealth to assemble a scientific team which cloned dinosaurs. Intent on creating an amusement park showcasing his biological attractions, Hammond's park ultimately fails when the dinosaurs escape. While Jurassic Park was built on Isla Nublar, off the coast of Costa Rica, the animals were raised at an alternate location, named "Site B". Trespasser takes place a year after the events of The Lost World: Jurassic Park, where the general public has learned about the existence of Jurassic Park. A sightseer named Anne is in an airplane in the Pacific when a malfunction occurs and the plane crashes.

Anne awakens on the shores of an island, and proceeds to explore. Anne learns she is on Site B, InGen's dinosaur breeding facility. Pursued by dinosaurs, Anne makes use of weapons left behind to defend herself as she explores. Following a monorail track into the island interior Anne encounters Albertosaurus, Brachiosaurus, Parasaurolophus, Stegosaurus, Triceratops, Tyrannosaurus, and Velociraptor. After recovering security cards from an InGen town, Anne proceeds past a dam, through the InGen harbor and laboratories. From there, she ascends Mt. Watson, the largest mountain on Site B. At the summit, Anne is able to call for help. She battles an Utahraptor/alpha Velociraptor and is rescued by helicopter. Later on, she's in her apartment. Jill calls again, saying she "better have a good @#!*% reason for not calling." Anne responds by throwing a raptor claw on her desk.

The game was initiated by two former employees of Looking Glass Technologies, Seamus Blackley and Austin Grossman. With the film The Lost World: Jurassic Park expected to be a success and after securing the movie license, the pair approached several movie animation groups before signing with DreamWorks Interactive. Adobe Photoshop 5 and 3D Studio Max were used to produce the game. A 3D model of the island was also built and digitally scanned. The game had a development period of more than three years. Money was the biggest hurdle in the development of Trespasser. The game severely went over-budget several times throughout its development. Second only to money was time, as the game had to be ready to meet the release of the The Lost World: Jurassic Park film. Originally the game was to be released in the fall of 1997. However due to a number of problems the project was delayed by a year. The rush to release the game caused many features to be either cut, or left unfinished and unpolished.

Due to difficulties coding the behavior of both arms together developers had to ditch the left arm entirely. A late shift in development effectively changed the game from survival horror to action shooter, and contributed to the many complaints the game received. Lack of experienced management and the use of artists who were unfamiliar with basic game development processes and 3D modeling has also been identified as a cause of problems. Developers struggled for more than two years on some problems and in the end released a game that is set within a very large, attractive, open, outdoor environment.

The Trespasser engine was, and in many ways still is, unique. In 1998, it was one of the first engines to successfully portray outdoor environments full of hundreds of trees. Unfortunately, not many computers in 1998 could render the complex environments it generated. The result was the worst clipping one reviewer had ever seen with another finding the game experienced a slowdown and frame rate drops. In addition, the Trespasser engine featured the first game world to be completely influenced by classical mechanics and was also the first game to use ragdoll physics.

Three levels are known to have been cut from the final release:

Plantation House - This level was one of the first to be scrapped. It would have followed Jungle Road and in turn be followed by Industrial Jungle. The level was eventually scrapped and merged with Jungle Road. Among the leftovers, are the famous hidden valley that went unused, Cathy's beach, and the Plantation House itself.

Plains - This level would have started as soon as the player exited the Town gates originally. It was supposed to feature a large open area that could be seen from a long distance. Among other things, Harold Greenwood and the Dam were originally supposed to be here. The Smuggler's Plane was also to be featured here. After the level was scrapped, it was merged partially with the Ingen Town level and the Smuggler's Plane was moved to Industrial Jungle. However, there is evidence in the leaked Beta 96 prototype that it was planned to appear in one of the ascent levels as a model is hidden underground in the beta versions of one of the ascent levels.

Pine Valley- This is the most famous of the three having been turned into the Trespasser demo level, albeit stripped down heavily. It featured a massive Geothermal Plant and a complex Puzzle to restore the plant's power and has recently been confirmed as the spot close to where the Trailers went over the cliffs in the second movie. The level was originally preceded by the lost Plains level and followed by the Ingen Lab Level. Part of this level was added to the beginning of the Ingen Lab level in the Retail.

Trespasser was a commercial failure with only 50,000 copies sold. Reviews of the game were mostly negative, however some reviewers felt the game had a few positive elements. A few reviewers were impressed by the title's originality and scale, open world games being somewhat of a rarity back in 1998. Many of the review disliked the poor graphics performance on even the fastest, graphically accelerated PCs available upon the game's release. Despite the anticipation over the many "first attempts at" within the game's original development scope, the reality did not match the hype.

Despite its shortcomings, the game continues to have a devoted fanbase, many of which have created tools and level editors to enhance the game beyond the original retail release. A number of projects have also been proposed to remake the game using newer and more capable game engines. Several advances have been made using the old engine. Notable examples include TresCom's TresCom Isle, the first stand-alone mod which features new never-before-seen dinosaurs such as the Procompsognathus, new puzzles, new effects, and true non-linear gameplay. Fans have taken to making their own new levels using TresEd (fan-made software that allows the user to edit Trespasser.) 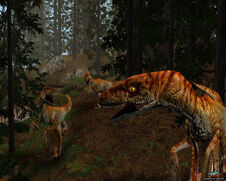 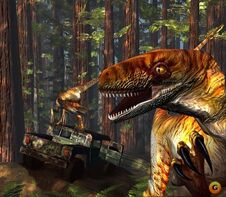 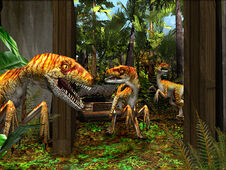 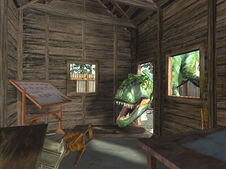