In 2013 Universal struck a new deal with the toy company Hasbro to create new Jurassic Park merchandises for the release of Jurassic Park 3D.[1] This series saw the release of two new dinosaurs that were previously unreleased in 2011, and also re-released some of the 2009 toys.

This set contains Pachyrhinosaurus with Gunner Gordon : A mecenary who specializes in heavy weaponry.[2] 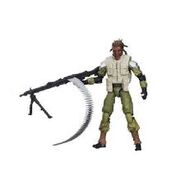 This set contains Allosaurus (with articulated limbs and Dino-Damage), and Ash Skullstriker : A mercenary with skills in archery and martial arts (according to the packaging).

Retrieved from "https://jurassicpark.fandom.com/wiki/Jurassic_Park_3D_(Hasbro)?oldid=225037"
Community content is available under CC-BY-SA unless otherwise noted.