This scene was supposed to emphasize a romantic relationship between Dr. Grant and Dr. Sattler, as well as introducing a few bits and pieces of techno-babble about the Velociraptor skeletons. Overall these scenes were to establish a little background information about the characters and to foreshadow the Velociraptor intelligence seen later in the film as intelligent pack hunters. These were probably eliminated due to pacing.

The text of this scene can be read in the Jurassic Park Film Script, scene 5.

While arriving at the island a brief scene that appeared in the trailer was cut where Dr. Sattler grabs the extinct plant leaf she talks about later in the film. The text of this scene can be read in the Jurassic Park Film Script, scene 15.

Why are the kids here?

This scene involves Hammond explaining to Gennaro, Grant, Sattler, and Malcolm why Lex and Tim are at Jurassic Park. Hammond tells them that their family is going through a difficult time as their parents are getting a divorce.

Hammond wants his guests to be understanding, but apparently Dr. Malcolm makes a cynical comment. This scene was also possibly cut due to the pacing of the film. The text of this scene can be read in the Jurassic Park Film Script, scene 31.

There was another scene deleted from the film: The two Ford Explorers coming out of an underground garage beneath the Visitors' Centre. The cars slowly drive themselves on a semi-circular turn and stop before the tour party. The later half of this scene is present in the DVD release, but it does not state from where the cars come. There was no plausible reason to cut out the scene especially when it was more or less 15 seconds long. This is briefly described in the script itself - Two ford Explorers "leap" out of an underground garage. There is no current proof of the scene existing in any visual format, it was not included in the much-talked about Jurassic Park 2D Blu-ray release or the 20th Anniversary 3D Bluray (sourced from a 4K scan). It is not clear whether these deleted scenes will be available in any form in the future home video releases. 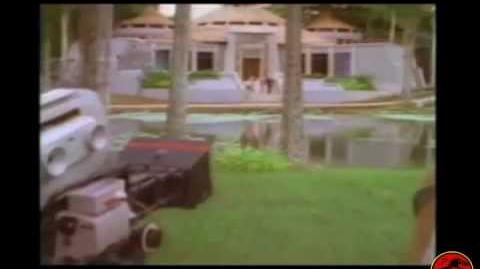 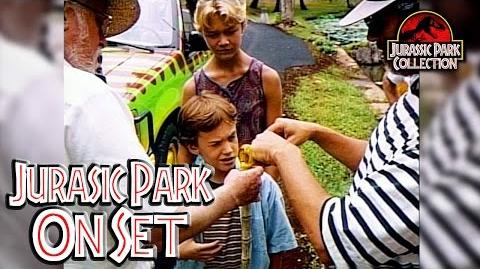 Jurassic Park On Set
Practice.
Add a photo to this gallery

This scene was most likely cut due to the pacing of the film, but it would have resolved why the Triceratops was sick. Tim finds rounded stones beside the West Indian Lilac that is toxic to the animals. It's suggested then by Ellie and Dr. Grant that when the Triceratops eats the gizzard stones it accidentally eats the poisonous berries beside the stones. This resolution was present in the novel, although the scene involved a Stegosaurus instead.

It's also worth noting that the baby 'Triceratops' scene was supposed to take place around this time. This scene was also cut at the last minute after Stan Winston Studios produced the model for use. The model would luckily be re-used in The Lost World: Jurassic Park when Nick and Sarah free the dinosaurs from the Hunters.

A couple of pictures have appeared showing what would be a longer journey for Grant and the kids trekking across Isla Nublar to return to the Visitor's Center. This scene is supposed to be before Grant and the kids scale the Perimeter fence.

Extended Journey to the Shed 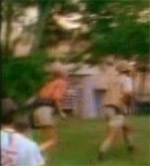 This scene appears on the Beyond Jurassic Park DVD that was featured in the Box Set release after Jurassic Park III was released on DVD. We apologize for the quality of the image. This shot could in fact be a directional shot to show where Muldoon and Ellie were heading. It's an interesting shot, probably to give an eerie tone to their trek, but it was also probably eliminated due to time constraints.

Extended Raptor in the Shed

This scene appears to be an extension to the scene where Ellie finds Grant. Ellie is supposed to be calling out to Grant and telling him to run towards the Bunker and asking where the kids are. It would have been a nice scene to keep in, but it doesn't answer the question of how Ellie loses her pink over shirt.

According to the shooting script, when Ray Arnold heads to the maintenance shed to turn back on the power, Muldoon and Ellie carry a Gerry-rigged stretcher with Malcolm on it down a narrow path in the compound.

The shooting script presents three different versions of the scene in which Grant and the kids depart into the jungle. Having escaped from the car, Grant convinces Lex that she is much safer with him and Tim in the jungle than she is inside the culvert. In one version, we learn that Grant has a map of the island which answers the question of how Grant knew how to get back to the Visitor's Center. The scene was likely cut to keep the pace. 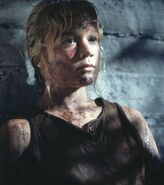 Lex in the culvert

According to an interview Jeff Goldblum gave for the Encore Movie Network's "The Directors" special on Steven Spielberg, it was originally planned for Malcolm to flee in panic rather than heroically trying to create a diversion so Grant could rescue the kids. Unhappy with the cowardly direction his character was taking, Goldblum persuaded Spielberg to change the scene. Some have speculated that this change came very late in the movie, as both the comic adaptation and the shooting script contain the original version.

As Grant eagerly tries to force the door to the hatchery open before the others catch up to him, Gennaro tries to stop Hammond from letting the scientists into the lab. Also trimmed from the final cut is a longer dialogue between Ellie and Malcolm as he presents his theory on why the park will fail. Though both scenes are part of the larger lab scene and use tiny details to outline the character's personality traits, neither are integral to the film.

The comic adaptation presents an extended version of the scene where Tim and Lex show up. Hammond picks up Grant's reaction and says, under his breath, "Have a heart, gentlemen. Their parents are getting a divorce and they need a diversion. Maybe they'll get you into the spirit of this place." This scene was filmed. Although, this is the reason for Lex and Tim's presence at the park in the novel.

Journey to the Island (Extended)

The comic adaptation presents an extended version of the scene where the scientists travel to the island. As the helicopter nears the landing pad, Grant and Ellie both question Ian Malcolm over his theory that the mysterious project on the island will ultimately fail. "Hammond's project is an apparently simple system, but chaos theory explains that simple systems will inevitably produce complex behavior," Malcolm explains. It is unknown if this scene was filmed, as the shooting script presents no similarities to it. It is possible that comic adapter Walter Simonson added these few lines in to help develop the characters.

These scenes, based on the ones in Crichton's novel, where Grant, Lex, and Tim are going downriver on a raft, were partially filmed, yet scrapped and left uncompleted due to lack of time and money. Another interesting fact about the nicknamed title "River Adventure" was from the screenwriter David Koepp on the raft sequence quoting that the scenes were never shot.

"I never wanted the raft sequence. It seemed to me at certain points in the book that we were being taken on an obligatory tour past every dinosaur the park had to offer. My feeling was that once the park broke down there should be total chaos. I thought the raft trip was rather redundant. So for me, it was an easy cut to make, especially because it would have been so monstrously expensive."

There were apparently plans to also film several other scenes that originally took place during the novel's river raft sequence. One was to feature the Tyrannosaurus sleeping (which took place directly before it swims after Grant and the kids in the raft). Another had the Tyrannosaurus licking Lex and Tim after they reach a waterfall. It was speculated that the later scene was cut due to that fact that the Tyrannosaur's tongue was too unrealistic looking. However, this scene was eventually used in the sequel The Lost World: Jurassic Park.

There were two alternative endings to this movie before Spielberg and the other crew decided that the T. rex was the other star of the film besides the raptors. One included a raptor being crushed by dinosaur bones.

Rumors persist that the theatrical version of "Jurassic Park" included a scene towards the end of the film where the Tyrannosaurus actually smashes through a plaster wall in the Visitor Center. This scene was not included in the DVD or VHS release of the film, and no evidence other than first person accounts has been found for this scene's existence.

Steve Spaz Williams in his Vimeo channel said no such scene ever existed. Spaz cannot be said of towing the official line as he is no longer with ILM or even in mainstream Hollywood for the matter of fact. So, it may be assumed that he is telling the truth. Here is the link to his comment- http://vimeo.com/39431924

There was a scene in the Lab where we witness a dinosaur hatch from an egg. Originally a Triceratops was going to hatch, but was later on was switched to a Velociraptor, so that way Dr. Alan Grant asking to see the adult raptors would make more sense.

In the scene where Ellie Sattler is in the maintenance shed trying to turn the power back on, a raptor would grab her.

In the theatrical version of the film the scene where Gennaro dies is carried on longer than it is anywhere else.[citation needed]

Dinosaurs cut from the film

Retrieved from "https://jurassicpark.fandom.com/wiki/Jurassic_Park_Deleted_Scenes?oldid=238751"
Community content is available under CC-BY-SA unless otherwise noted.