The story is essentially the same as the film's, with some minor differences. On Isla Nublar, a Velociraptor is being transferred to her pen when it attacks and injures a worker, forcing the other workers to shoot and kill her.

At the Mano de Dios Amber Mine in the Dominican Republic, a lawyer representing InGen's investors, Donald Gennaro speaks to Juanito Rostagno, who tells him John Hammond can't see him because he had to go be with his daughter, who is getting a divorce. When Gennaro brings up the possibility of getting paleontologist Alan Grant to be one of the experts to sign off on the park, Rostagno tells him Grant is too involved in his work, and then has to leave because his men inform him they've found another mosquito.

At Alan Grant's dig, he and his associate, paleobotanist Ellie Sattler, have just dug up four complete Velociraptor skeletons. The positioning suggests they died together, and Ellie theorizes they had some kind of social order. Grant agrees, suggesting they hunted as a team. He theorizes that the fossil Tenontosaurus bones they found were the raptors' last kill. Ellie then suggests they died during a drought. Their discussion is interrupted by a volunteer who calls them over to where they use a device called a "thumper" to bring up an X-ray image of a fifth Velociraptor skeleton. Grant is ecstatic, but one young boy comments that the dinosaur doesn't look "very scary."

Grant regales him with a tale of how raptors hunted in packs, and the boy envisions himself in the Jurassic Period, where he is attacked by several raptors. He is brought to tears. Grant tells him to "show a little respect" next time. Ellie disapproves of how Alan handled the boy, and Grant comments that he has always disliked kids. "Oh, Ellie, look. They're noisy, they're messy, they're sticky, they're expensive." Ellie calls him cheap. Grant has even less nice things to say about babies. "They can't walk and they know very little about the Cretaceous! Or dinosaurs!"

"It frustrates me so much that I love you, that I need to strangle you right now!" Ellie jokes.

Suddenly an InGen helicopter appears and lands. Ellie runs to tell the volunteers to cover everything up so the rotor wash won't bury their discoveries in sand, while Alan rushes to the trailer the team uses as their headquarters to confront the helicopter's passenger. The volunteers glumly inform him the man inside, John Hammond, has just opened their champagne. "We were saving that!" Grant complains as he confronts Hammond.

"Delicious!" Hammond comments, having a sip. "And it's just the beginning. I guarantee it!"

Ellie barges in and calls Hammond a jerk, but walks it back after learning he is the man who's been funding their digs. Hammond lets his pass, understanding their surprise and anger. He tells them he owns an island off the coast of Costa Rica and wants them to come down for a visit, explaining the problems with his investors insisting InGen needs "outside opinions." He declines to mention that there are live dinosaurs on the island, but does describe the attractions as "right up your alley." Grant initially refuses until Hammond promises them further funding, and Grant replies, "Our bags are packed!"

At a cafe in San Jose, Biosyn representative Lewis Dodgson meets with Dennis Nedry, Jurassic Park's chief computer programmer. He is hiring Nedry to steal viable dinosaur embryos from the park and provides him with a fake can of shaving cream to transport them in. He seems doubtful Nedry can succeed, but Nedry reassures him: "I got an eighteen minute window. Eighteen minutes, and your company catches up on ten years of research. And Dodgson, pick up the check. Don't get cheap on me. That was Hammond's mistake."

On the helicopter ride from Costa Rica to Isla Nublar, Grant and Ellie are with Hammond and get introduced to Donald Gennaro and mathematician Ian Malcolm. Malcolm insists he prefers the term "chaotician," and explains Chaos Theory to his fellow passengers and how he thinks it applies to Jurassic Park. Hammond dismisses Malcolm's ideas as "codswallop" and a "Bunch of fashionable number crunching!" Malcolm is persistent, however, his attention soon turns to Ellie, who he begins attempting to flirt with. After dismissing Malcolm as a "rock star," Hammond points out Isla Nublar.

He gives a detailed history of the island's origins as a seamount as the helicopter flies over it. Grant seems uninterested in Hammond's talk of the island and instead wants to hear more about Malcolm's ideas, reading an analysis Malcolm prepared beforehand. Malcolm explains, "Hammond's project is an apparently simple system. But Chaos Theory says that simple systems will inevitably produce complex behavior." He goes on to say nonlinear dynamics applied to the startup conditions will ensure the island will behave in an unpredictable fashion.

Ellie asks if he's confident in his assertions, and he replies that he is. An annoyed Hammond tells him to "put your pessimism back in your pants," and the helicopter lands, albeit a little roughly due to bad wind shears. Hammond thinks it's thrilling, but Malcolm becomes a little frightened. Hammond reassures him they're planning an airship. After landing the group gets out and gets aboard two "lightweight electric Explorers" which drive through the massive front gate of the park. "What've they got in there... King Kong?" quips Malcolm.

During the ride, Gennaro tells Hammond "Let's get something straight, John. This is no weekend excursion. This is a serious investigation of the stability of this island." Hammond dismisses him and tells him to be quiet because he wants to watch the other visitors' reactions. Ellie, excited, finds a plant which she identifies as a species of veriforman. Grant admits he has never seen tree trunks like the ones next to them, either, until suddenly the "trees" begin to move, and the scientists are startled to look up and realize they're the legs of a living Brachiosaurus.

Differences from the Movie

Including what is described above:

This comic issue was very well-received by comic book critics. It later turned out to be the first issue, in an entire adaptation, of the film. The Jurassic Park comics are now considered to be classics, just like the Novel, the Movie, and the Junior Novelization, of the movie.

Alternate version of the Collector's Edition cover with a different color scheme.

"Amberchrome Edition" of the Collector's Edition. 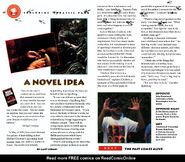 Add a photo to this gallery
Retrieved from "https://jurassicpark.fandom.com/wiki/Jurassic_Park_I?oldid=250173"
Community content is available under CC-BY-SA unless otherwise noted.