The player is again cast as a Dino Defender. The Dino Defender Chief, a character who serves as both an authority figure and narrator, returns from the previous game to guide him through menus. Danger Zone also recycles several cutscenes and menu designs from its predecessor.

In the game the tokens are Ford Explorers from Jurassic Park, designed for up to 2 players. The players' mission is to collect DNA from a dinosaur of your choice such as T. rex, Spinosaurus, Pteranodon, Brachiosaurus, Compy, Velociraptor, or Stegosaurus. The game features many mini-games such as a raptor fight where you play a raptor and fight another raptor, or hunt in a field to obtain DNA of dinosaurs using a helicopter. The game ends when you have filled the "DNA meter" with the DNA of the dinosaur you chose.

Dinosaurs & other creatures to dart to get DNA 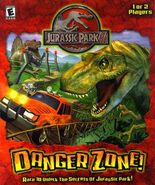 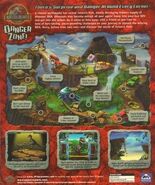 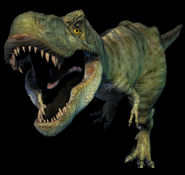 Call of the Wild

Truck falling into a river below a canyon.

Dino Defender ID Cards
Add a photo to this gallery
Retrieved from "https://jurassicpark.fandom.com/wiki/Jurassic_Park_III:_Danger_Zone!?oldid=215053"
Community content is available under CC-BY-SA unless otherwise noted.