Worldwide
Jurassic World: Alive is a free-to-play, location-based augmented reality game developed by Ludia. The game was officially released worldwide on May 24, 2018, 20:35 GMT and is available on both iOS and Android.

They're ALIVE in our world!

Dinosaurs have returned to rule the Earth. They have fled Jurassic World on the unstable island of Isla Nublar… and they're roaming free in your cities and neighborhoods.

As a brand-new member of the Dinosaur Protection Group (DPG), your mission is to save dinosaurs from a second extinction. Explore your surrounding area to find your favorite dinosaurs – including new breeds that are more awe-inspiring and terrifying than ever before. Activate augmented reality (AR) to interact with these unbelievable creatures in the real world.

Track these magnificent animals with a drone and collect DNA samples needed to level up and create hybrids in your Lab. Then, assemble the perfect dinosaur strike team and take on dangerous threats in real-time PVP arena battles!

There are six key aspects to gameplay: exploring, leveling up, collecting, creating, battling, and earning rewards.

Explore the world with location-based technology and discover dinosaurs on a map. Identify behavior patterns to track specific species in their natural habitats. For example, large herbivores can mostly be found in the day, while smaller carnivores are abundant at night.

Using a scent capsule guarantees that one creature of the associated rarity will spawn, though it is not guaranteed to be the first one spawned. The scent stays around the player; spawning creatures of random rarity. Scent capsules work better if the player is moving.

Scent capsules only apply to the player who activated it; other players will not benefit from others' scent capsules.

Create hybrid creatures by combining the genetic traits of multiple species to develop their strengths and abilities. These can take anunholy amount of time to get the DNA for it.

Battle a strike team of dinosaurs to defend against threats to your mission and challenge others in real-time PVP competitive arenas.

Strike events are limited time battle events that appear on the map. The player selects 4 creatures from their Strike team to use in each level. The event ends if the player completes all stages and claims the final prize, or if they fail a pre-selected number of times.

Earn rewards such as in-game currency and battery life for your drone by finding Supply Drops on the map. There is a limit to the number of coins and cash a player can earn through visiting Supply Drop. This limit is unaffected by Incubators and Battle rewards.

There are three types of Supply Drops. Each has two Prize faces and a VIP face. On each face there is a chance to either earn Darts, Coins, or Cash. A normal player will only receive a maximum of two rewards. The chances of getting Cash are very low.

These Supply Drops are orange and they can be found all over the map.

These Supply Drops are green and can be found parks; dark green areas on the map. These are typically available for 12-hours during a special event. They will feature a special dinosaur and players have a constraint on how many they can catch in a day e.g. 12 for common and 3 for rare or epic.

These Supply Drops are yellow and can be found at sponsored businesses.

All players start with a reusable Incubator that has a six-hour duration. Earned Incubators come in four rarities: Common, Uncommon, Rare, and Epic. All types of incubators can be earned by battling in the Arena.

The duration of these typically last 15 minutes and they offer a minimum of x3 rare DNA, x29 DNA, 50 coins, and 5 darts.

These are Epic incubators but they offer much greater rewards. These can only be received by travelling to the sponsored location and clicking on it. A player can only redeem these one time, independent of the location they received it.

On June 6, 2018, AMC theaters sponsored a 24-day in-game event that allows players to receive on if they visit a their local AMC theater.[1]

For a limited time, special treasure chests appear on the map containing large quantities of coins.

Coins gathered from the chest count towards the daily coin limit, but coins can be collected from them even if the player has reached their coin cap. It is unknown if this is an intended feature.

Jurassic World: Alive offers a monthly subscription referred to as VIP at USD $9.99. Please note prices may vary depending on sales taxes or countries.

Special events feature green Supply Drops that only appear in park areas, and are paired with the featured Dinosaur. Please note that the maximum cap for regular Supply Drop (SD) still applies. These events typically begin around 10:00 AM EDT and last for 12 or 24 hours.[2]

Continued use of GPS running in the background can dramatically reduce battery life.

Compatible with Android devices on OS 4.4 or later installed.

AR capabilities available on Samsung S8 and up, and Google Pixel with OS 7.0 or later installed.

Compatible with iPhone 5 and up, iPad 4 and up, iPad mini 2 and up, iPod 6 and up, on devices with iOS Version 10 or later installed.

AR capabilities available on iPhone SE, 6s and up, and on iPad Pro on devices with iOS Version 11 or later installed. 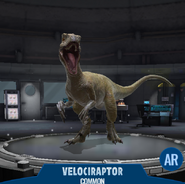 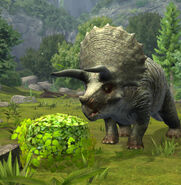 Triceratops GEN 2 while being fed.