May 2018
The Jurassic World: Fallen Kingdom Survival Guide is an 80-page informational book by author David Lewman published by Random House in May 2018 to promote the release of Jurassic World: Fallen Kingdom in June. It is written in an "in-universe" perspective with small post-it notes by Claire Dearing, Owen Grady, Zia Rodriguez, and Franklin Webb scattered throughout.

The book contains the following sections:

Most of the book is told from Claire's point of view except for Claire's personnel profile and the comparative size chart in the Dinosaurs We May Encounter section that were created by Zia.

This small section shows a memo written by Claire describing the mission of the DPG and who is on the team.

These pages display the brochure map of Jurassic World and talk about the island and what has happened to it since the park was shut down in 2015.

These pages go through the timeline of events from 1984 to the present year of 2018, bringing up crucial moments throughout the years, such as: InGen's formation, the first successful cloning (a Triceratops), the 1993 Isla Nublar incident, the 1997 and 2001 Isla Sorna incidents, John Hammond's death, and so on.

Profiles describing Owen, Claire, Zia, and Franklin are in this section. The profiles detail the person's background and what they bring to the DPG team.

Dinosaurs We May Encounter

This section contains a comparative size chart and individual dinosaur profiles created by Zia. On the size chart, a post-it note from Zia mentions that InGen "made several of these dinosaurs bigger than their real-life ancestors."

Dinosaurs included in the size chart:

The Allosaurus and Brachiosaurus do not have their own profile pages. The Pachyrhinosaurus lacks a separate profile as well, although that is explained as a production error. Despite not being featured on the size chart or in the fifth film, the Indominus rex has a profile page depicting a fully grown specimen.

Benjamin Lockwood, Eli Mills, Ian Malcolm, and Henry Wu are given profiles in this section.

Claire briefly summarizes the safety measures they've taken for the rescue mission, including the armored vehicles and containment units for the dinosaurs. A post-it note from Owen serves to remind everyone to wear their protective vests at all times, and that one tranquilizer dart won't be enough to bring down every species.

This is Claire's last warning to everyone to be especially careful on the mission, that every dinosaur poses a threat and should be treated accordingly. 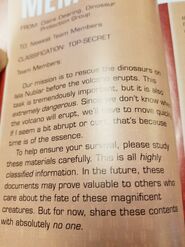 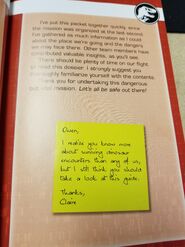 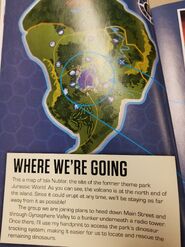 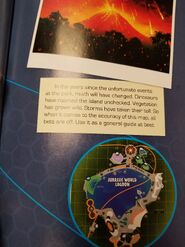