English
Jurassic World: Live Tour is a 2019 live theatrical show. The show takes place in the Jurassic Park franchise as a sequel to Jurassic World.[1] It stars Madison Embrey as Dr. Kate Walker, an Isla Nublar scientist who created the Dino Decoder, a plot-central item.[2].

Set some time between after the Indominus rex rampage in Jurassic World and before the events of Jurassic World: Fallen Kingdom, Jurassic World scientist Kate Walker is working on better understanding the thoughts, emotions, and feelings of dinosaurs. To help her research, she studies Jeannie, a female Troodon. Jeannie is however under eye of a corrupt plan to weaponize dinosaurs in a desert InGen Facility located in Chile, with the most recent project being the Desert Raptors. Eventually, the story concludes back on Nublar.

Jurassic World: Live Tour first premiered in September 2019, and had various showings that continued into 2020.

Just before the incident on Isla Nublar, a pair of tourist in a Gyrosphere encounter a Triceratops on the tour. As it wanders away they are approached by a Troodon named Jeannie, which begins to attack them, when Dr. Kate Walker, the scientist studying Jeannie, and Oscar, a member of the Asset Containment Unit stationed at the Troodon enclosure, intervene. Kate manages to calm Jeannie down while Oscar watches over the situation allowing the tourists to leave. However, before they can lead Jeannie back to her pen, the ACU arrive, under the command of Kent Reave, InGen's head of Special Ops, who have come to capture Jeannie. Despite their best efforts, Kate and Oscar are forced to relinquish the situation to the ACU, who quickly move her back into her pen. Arriving shortly afterwards, Kate and Oscar check up on Jeannie before being interrupted by Dr. Martin Riley, and his two new interns, Chad and Allison. As the Dino Decoder, a device that can read the basic emotions of a dinosaur, is hooked up to Jeannie, she begins to become nervous. Soon afterwards, the Indominus rex breaks into the paddock and forces the group to evacuate, and leave Jeannie behind.

Three months later, Kate, Chad, Allison, and Riley have continued their research on the Dino Decoder in New York. Kate has been attempting to get into contact with Ingen to find out what happened to Jeannie, when one day the Dino Decoder gets a reading from Jeannie. At first overjoyed, the experience is dampened by the reading, indicating Jeannie is not only in fright, but also in Chile, hundreds of miles away from Nublar. Meanwhile, a military base is located in Chile, where Jeannie and some green Velociraptors are.

As Kate and the others break Jeannie free from the compound and return to Isla Nublar via plane, they attempt to find Jeannie’s eggs which were left behind on Isla Nublar. They travel into the Adventure Zone and encounter a nest, but a Triceratops confronts Allison who was holding the eggs, and Blue also came in, clawing the Triceratops, and the gang escapes. They later encounter two bioluminescent Stegosaurus, one adult and a juvenile, which serves as a reminder of finding Jeannie’s eggs. Later, the mercenaries, led by Reave, come and attempt to track and capture Kate, Jeannie, and the others, but a Pteranodon flock attacks, and picks up and flies away one of the antagonists. Later, the T. rex comes and Chad’s phone alerts it, and they run.

Later on, Reave corners Kate, but Riley knocks the antagonist off of a cliff, and they kiss. Reave survives, having fallen on some trees, and confronts the group, but the T. rex comes again but the mercenaries attempt to have it at bay by lighting flamethrowers, but Blue and Jeannie intervene and stop the flamethrowers, with the T. rex and Blue chasing Reave and his scream can be heard. The mercenaries escape, and Jeannie’s eggs hatch, with two new baby Troodon. Kate and her friends leave, with Jeannie and her two babies remaining on the island. 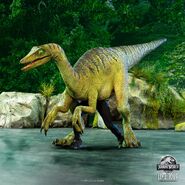 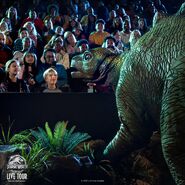 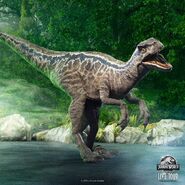