Jurassic World: Primal Ops is a early access IOS mobile game which had a soft launch. in certain countries.

Players become an "an elite battle-trained dinosaur handler" and must travel across North America and rescue dinosaurs from poachers, mercenaries and other threats. Once you rescue a dinosaur you can call on them to fight alongside you in battle with each dinosaur having its own unique abilities. By exploring North America you may also find Dinosaur eggs, DNA strands and other secrets hidden throughout the landscape. You can use these collectables to level up and strengthen your dinosaurs furthering your bond with them and unlocking new abilities[1] 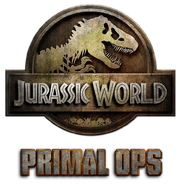