Jurassic World: The Exhibition is a touring attraction where visitors go inside the fictional Jurassic World theme park. Using animatronic dinosaurs created by the Australian based company the Creature Technology Company who had previously created the animatronics for the stage show Walking With Dinosaurs: The Arena Spectacular, it was first housed at the Melbourne Museum[1] from March 19, 2016 through October 9, 2016.[2][3] Afterward, it was held at the Franklin Institute from November 25, 2016 through April 23, 2017[4] and the Field Museum of Natural History from May 26, 2017 to January 7, 2018. Paleontologist Jack Horner, who was paleontological consultant for the four films, was consulted for the design of the dinosaurs and their film inspired environments.[5] A new 'theme park' of the same name in Dallas is set to officially open on June 18, 2021.

From the Imagine Exhibitions website:[6]
"Jurassic World: The Exhibition immerses visitors in the magic of Isla Nublar by taking them into the heart of The Park. Here, they can get as close as they dare to the world’s most life-like dinosaurs. Created in close collaboration with Universal Studios and renowned Paleontologist Jack Horner, Jurassic World: the Exhibition allows visitors to tour The Park as VIP guests, placing them in some of the film’s most iconic moments.

From the Ferry ride to Isla Nublar to a harrowing escape from Indominus rex, the exhibition is awe inspiring. Guided by a virtual Park Ranger throughout their experience, visitors encounter a 7-meter tall Brachiosaurus, come face to face with a massive 9-meter-long Pachyrhinosaurus, and “step behind the glass” at The Hammond Creation Lab to engage with the real world science surrounding dinosaur DNA. In the distance, the roars of the ferocious T. rex and Indominus rex echo – and these will be encounters you will never forget. 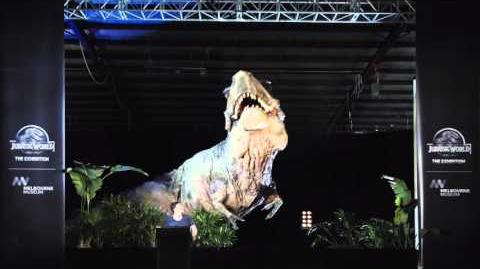 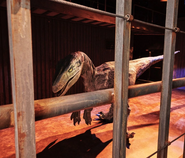