Jurassic World: The Game is an application produced by Ludia in 2015. It is a construction and management simulation game in which the player builds and maintains the Jurassic World park from Jurassic World.

During the game the player must build Jurassic World by adding dinosaurs and other prehistoric animals which can be obtained via special card packs or by buying them. In order to buy a dinosaur, however, the player must unlock it by completing a challenge in the Arena, an Earth Shattering unlock event or a Shake the Earth Tournament. There are also many missions given by the main characters which can grant the player resources such as dinobucks, coins, food, DNA, S(super)-DNA and Loyalty Points.

Returning from Jurassic Park: Builder is the Arena mode, where players can create a team of up to three prehistoric creatures and fight against other creatures. Unlike the previous game, the fighting engine has been completely revamped. A player can choose to either attack, defend or reserve a move during any one turn and any reserved moves are added to the next turn, for a maximum of eight moves in a turn. The more attacks that are performed in one turn, the greater the damage caused. In addition, the creatures are divided into different "types", each with a strength and weakness to another.

Each of the following characters plays a role in park development in the game. They contribute to the on-going story and/or offer missions to complete.

All dinosaurs, prehistoric creatures and hybrids available to create.

Attention: We are in need of the new card pictures from the latest version with all the dinosaurs DNA cost (this also counts for each dinosaurs' page), their hatching times (hrs, mins, and secs), and their DNA costs.

All boss dinosaurs available in this arena, so the player is unable to place and use them in their park.

These creatures are only mentioned in the game at the moment, but may be added to the game in the future.

There are three types of structures in the game - static, buildings and decorations. Static buildings are buildings that have some function(s) the user can access, but they can not be bought and placed, or moved. These are:

Buildings and decorations can be purchased and placed anywhere you have cleared land. Buildings earn you coins over time, decorations placed close enough to buildings or dinosaurs will increase the amount of coins they produce. It is possible to have more than one decoration affect the same building or dinosaur - the bonuses add up. 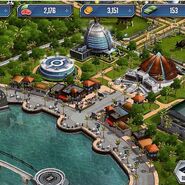 Raptor Paddock
Add a photo to this gallery

Retrieved from "https://jurassicpark.fandom.com/wiki/Jurassic_World:_The_Game?oldid=242547"
Community content is available under CC-BY-SA unless otherwise noted.