Jurassic World is a line of toys based on the film Jurassic World. It is manufactured by Jada Toys and was released to coincide with Hasbro's own toy line based on the film. It focuses primarily on the vehicles depicted in the movie. They come in two varieties: basic die cast and radio controlled (RC). The RC cars are larger than the die cast ones. 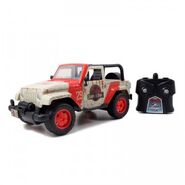 1:64 Peterbilt
Add a photo to this gallery

Retrieved from "https://jurassicpark.fandom.com/wiki/Jurassic_World_(Jada_Toys)?oldid=220034"
Community content is available under CC-BY-SA unless otherwise noted.