"Watch the world's only flying dinosaurs from the safety of our enclosed viewing area."
—Park Map(src)

The Jurassic World Aviary was an attraction in the Jurassic World park that houses the park's pterosaur species: Dimorphodon and Pteranodon. Most of this space is devoteted to a huge dome which allowed the pterosaurs to have ample space to fly but still be contained. It has an area of 430,000 sq ft.[1]

The Isla Nublar Aviary was built in 2004, one year before the opening of Jurassic World. It was built around several rivers which provided the pterosaurs that resided there with fish.[1]

During the Jurassic World Incident an Indominus rex went inside the Isla Nublar Aviary with helicopter JW001 in pursuit of her. She scared out the inhabitants causing them to fly out of the hole she created. Soon afterward, the Jurassic World aviary received more damage when JW001 crashed into another one of its walls after being attacked by Pteranodons. The escaped inhabitants then attacked the park visitors in Main Street. A Dimorphodon managed to fly out of the island, but it was soon shot down by an InGen Security Division trooper who was being transported to the island it had left.[2]

The entrance to the aviary.

Several Pteranodon inside the aviary.

I. rex breaking into aviary

The outside of the aviary

The helicopter crashing into the aviary

A Pteranodon flying out of the aviary

JW001 crashing into the aviary near by Indominus

The Pteranodon flying out of the aviary to attack the JW001

I. rex roars in the aviary

I. rex roars at a flock of Pteranodon

Aviary security camera showing the Indominus inside the aviary 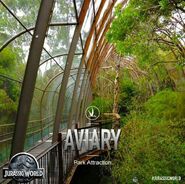 The Jurassic World Aviary is seen in the opening cutscene of the level "Under Attack" with an identical role to the movie.

It can be visited in the Jurassic World hub where players can spawn pterosaurs they have unlocked and can play as them. The crashed JW001 helicopter can be found there with Simon Masrani trapped in the wreckage. Freeing Simon makes him available for purchase and the player(s) earn a gold brick. 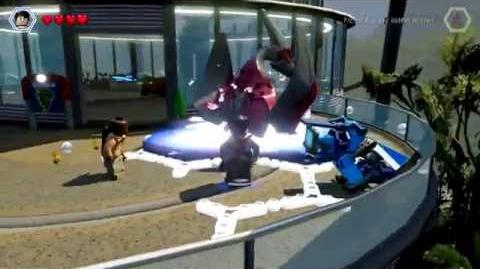 Dimorphodon in the aviary

In March 16th, 2016, the dome of the aviary for pterosaurs and flying hybrids was changed to one matching the Jurassic World Aviary.

In the storyboard of Jurassic World, the Aviary appeared before the I. rex broke into the aviary.[3]

Retrieved from "https://jurassicpark.fandom.com/wiki/Jurassic_World_Aviary?oldid=262495"
Community content is available under CC-BY-SA unless otherwise noted.